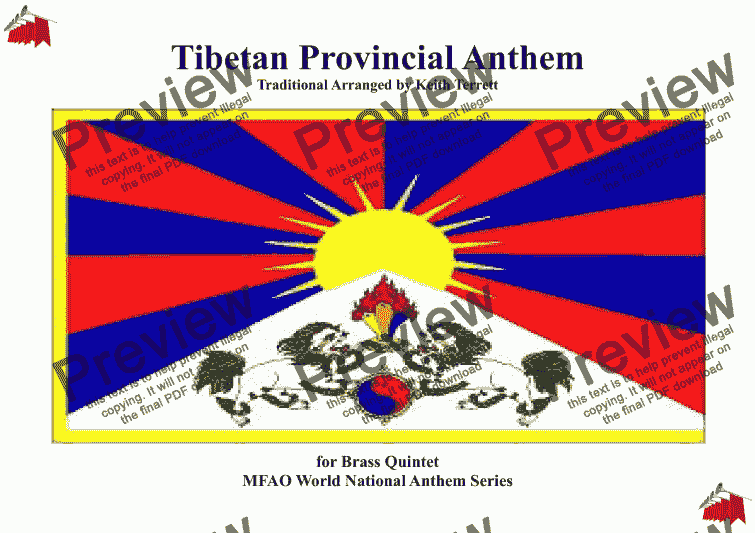 Arranged for Brass Quintet, the current Tibetan National Anthem, known as Gyallu, with ﻿lyrics ﻿written by Trijang Rinpoche in 1950. The anthem is used by Tibetan Government in Exile but is strictly banned by the People's Republic of China, including in Tibetan areas.

Tibet's first national anthem was, according to Tashi Tsering, written by a famous Tibetan scholar, during the epoch of the seventh Dalai Lama and under the reign of the Pholanas in between 1745-1746.

Gyallu is the current national anthem of Tibet. The anthem focuses on the radiance of Buddha.[1] The words were written by Trijang Rinpoche around 1950 but it is unclear exactly whether the anthem was first used before the incorporation of Tibet into the People's Republic of China in 1951 or after the 14th Dalai Lama went into exile in India in 1960.

The earliest report of an anthem (presumably Gyallu) is from the period of 1949 to 1950 (when Tibet was already facing the threat of a Communist Chinese invasion), introduced under reforms set in place to strengthen patriotism among the Tibetan people. Another report states that the anthem was presented to the 14th Dalai Lama in 1960 in exile.

The melody is said to be based on a very old piece of Tibetan sacred music, and the lyrics are by the Dalai Lama's tutor, Trijang Rinpoche. It has been used by Tibetans in exile ever since the introduction of the anthem although it is banned in Tibet. 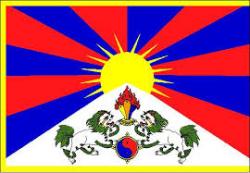