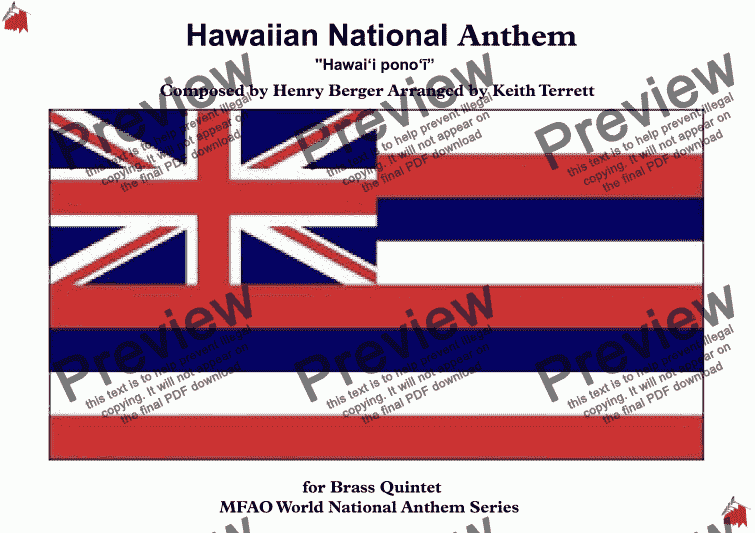 An arrangement of the national song of Hawaii for Brass Quintet. In 1876, shortly after David Kalākaua started his reign as Hawaii’s last king, the Hawaiian anthem was replaced with “Hawaiʻi ponoʻī”, which Kalākaua himself had written the lyrics to; the music was by the royal bandmaster.

When the Hawaiian monarchy was replaced with first a republic then with American control, the anthem was abolished. It was a natural choice, however, for a state song after Hawaii became a state in 1959, and was officially decreed as a state symbol in 1967. The last anthem of the Kingdom of Hawaii, now the state song, is still sung at sporting events, after the national anthem.

Hawaiʻi Ponoʻī is the current state song of the State of Hawaii. The words were written in 1874 by King David Kalākaua with music composed by Captain Henri Berger, then the king's royal bandmaster. Hawaiʻi Ponoʻī was one of the national anthems of the Kingdom of Hawaiʻi and also was the National Anthem of the Republic of Hawaii , having replaced Liliuokalani's composition He Mele Lahui Hawaii. It was the adopted song of the Territory of Hawaiʻi before becoming the state symbol by an act of the Hawaiʻi State Legislature in 1967. The melody is reminiscent of God Save the Queen and the Prussian Hymne, Heil dir im Siegerkranz. Hawaiʻi Ponoʻī is commonly sung at sporting events in Hawaiʻi, immediately after the national anthem. In the Hawaiian language, Hawaiʻi Ponoʻī means "Hawaiʻi's Own". Henry or Henri Berger (August 4, 1844, Berlin – October 14, 1929, Honolulu) was a Prussian ﻿Kapellmeister composer and royal bandmaster of the Kingdom of Hawaiʻi from 1872 to his death. ﻿Berger was born 'Heinrich August Wilhelm Berger in Prussia and became a member of Germany's imperial army band. He worked under the composer and royal bandmaster of Germany, Johann Strauss, Jr. Originally, Kaiser Wilhelm I of Germany loaned Berger from his Potsdam station to King ﻿Kamehameha V to conduct the king's band. ﻿He arrived in Honolulu in June 1872, fresh from service in the Franco-Prussian War. ﻿In 1877, King Kalākaua appointed Berger to full leadership of the Royal Hawaiian Band. In 1879, he became a naturalized citizen of the Kingdom of Hawaii.

Berger befriended the future Queen Liliʻuokalani, a composer in her own right. Berger arranged the songs she wrote, performed by the brass band. The queen named Berger the "Father of Hawaiian Music". From 1893 to 1903, the bandmaster worked with the Kamehameha Schools to develop its music program. He also built what is today the Honolulu Symphony.

He led the government band at thousands of public events. Among these were "steamer day," when a ship left the Honolulu docks. The band serenaded the departees with "Auld Lang Syne," or "The Girl I Left Behind Me."

Later in his tenure as royal bandmaster, Berger took it upon himself to record traditional Hawaiian hymns, chants and other Hawaiian music in print to ensure their survival, a task never done before. Berger at the same time composed the classics: "The Hula March", "Hilo March", "Kohala March" and "Sweet Lei Lehua." His arrangement of "Hawaiʻi Ponoʻī", with text by Kalākaua in honor of Kamehameha became the national anthem. Today, the song serves as the state anthem.

Berger combined German, Austrian and Hawaiian traditions in his unique compositions and performed with the Royal Hawaiian Band thousands of times, making Hawaiian music known and popular in many countries. Berger started the RHB 'Aloha" welcome and farewell greetings at the harbors

His resting-place is the Kawaiahaʻo Church Cemetery in Honolulu.

Berger's legacy continues today, celebrated worldwide especially in Hawaii and Germany, as the father of the Royal Hawaiian Band, the oldest municipal band in the United State.

Reviews of Hawaiin National Anthem (“Hawaii’s Own”) for Brass Quintet