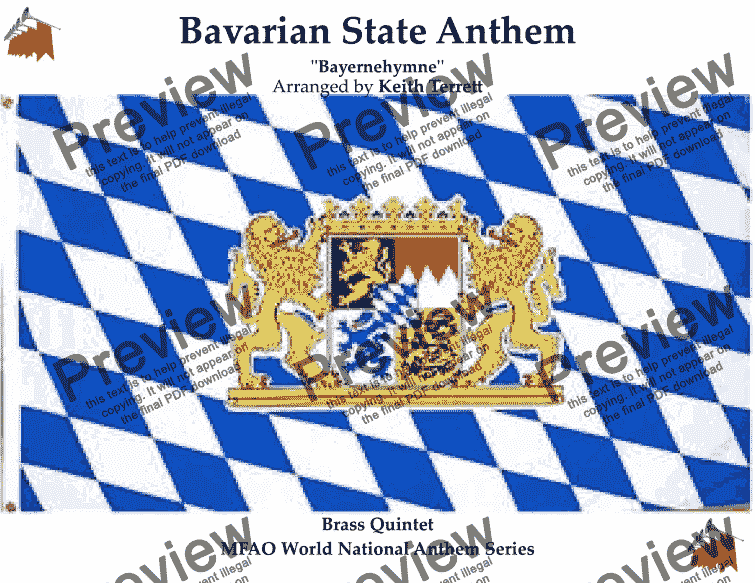 An arrangement of the Bavarian State Anthem arranged for classical brass quintet. The song “For Bavaria” is well known since the second half of the 19th century, before becoming the official anthem of the Free State of Bavaria. Poet of the original text was Michael Öchsner, a teacher from Munich, who wrote the poem in 1845. Composer was Konrad Max Kunz, professor at the Munich Conservatorium and leader of the royal choir at the royal opera, who composed the melody in 1858. Together they wrote the song “For Bavaria” in 1860. This song spread fast all over the country and was soon known by most people.

The anthem originally had lyrics praising the king of Bavaria in the third verse, this was omitted in 1918 and in 1946 the Bavarian poet Josef Marai Lutz wrote a new third stanza (which is now unofficially used) and changed a few of the words of Öchsner’s original. To end the discussion on various types of texts the Bavarian Prime Minister made a proclamation on July 18th 1980. This proclamation said that the text introduced in 1953 with its 2 stanzas, which is very close to the original text, should be used oficially. However, there are some differences between the “traditional” text and the “official” text, the “traditional” text having been used when Bavaria was an independent state, the “official” text (presented here) now mentions Germany.

When the German anthem became official in 1952, the Bavarian Parliament decided unanimously that the German National Anthem and the Bavarian Anthem should be played by Radio Bavaria and taught at school together. Since 1964 it was officially termed as an “anthem” (Die Bayernhymne) and is under protection of law and may not be abused or manipulated; Bavaria is the only German state that has an official anthem.

Need an anthem fast? They are ALL in.﻿ my store!

If you perform this arrangement in public, make a recording or broadcast it through any media, please notify the PRS (UK), or ASCAP ﻿(USA), or SOCAN (Canada), or APRA (Australia) or KODA (Denmark) or the equivalent organisation in your own country, giving the ﻿name of the arranger as Keith Terrett