By: Taylor Silver
For: Orchestra
This music is in your basket
View basket
Loading... 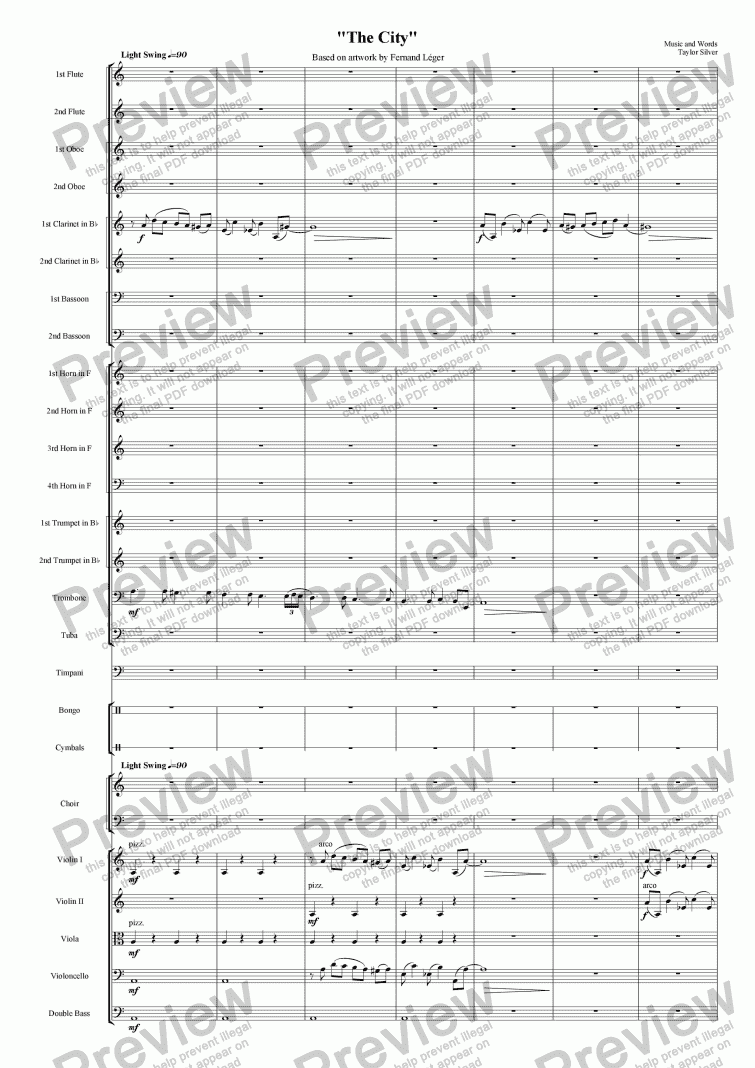 By: Taylor Silver
For: Orchestra

Composer
Taylor Silver
Year of composition
2003
Lyricist
Taylor Silver
Difficulty
Moderate (Grades 4-6)
Duration
5 minutes
Genre
Modern classical music
License details
For anything not permitted by the above licence then you should contact the publisher first to obtain permission.

This piece was written for the Sibmus competition, "Pictures for an Online Exhibition." It gained an honorable mention in its current form. The artwork seemed very dreary to me, and it reminded me of TS Eliot's "The Wasteland." I wanted to capture a similar desperate need to get out and try to convey the crowded nature of cities in general. I am currently reworking the piece for a longer more "finished" feel. It will be up in the next couple of months.

I knew I had to do something that I had never done, never studied, or never even thought about doing. I had to throw some atonality into this piece and get really creative. And it ended up being only very partially atonal, as most of the piece is based in A minor, I just couldn't go all the way with this. The artwork screamed confusion at me, and also made me claustrophobic and depressed. It reminded me a bit of TS Eliot's "The Wasteland," so I wanted to broadcast depression, confusion, utter helplessness, and even a sense of the walking dead. It didn't strike me until much later to use a chorus, and even later to come up with my own words. Anyways, I started off the piece quitely with, what I like to think of as, a Gershwin"esque" clarinet solo made dark and dreary with the trombone and pizz strings. Then I had these big scary chords, kind of like this one guy is walking around, and it dawns on him what a helpless dreary place this is, and it scares him. And "Boom" quiet. I break into the 12 tone melody that keeps doubling on itself, making things more and more confusing. We hear some city sounds in here, a car crash, an ambulance. Then a series of flat-lines in Oboe, Clarinet, and Bassoon, getting across that theme of death in the midst of the city. The chorus was pretty straightforward, I would have liked to make more versus and such, I just didn't want to make the peice too long. The painting was one of the most depressing things I had ever seen, and even if Leger didn't intend for it to be that way, it is what I saw, and the emotions it evoked in me.

Night: Concerto for Flute and Orchestra, Little Piece for Cello and Piano, Piece for Horn, Funeral March and The Grand Canal, Venice

Reviews of The City

Sorry, there's no reviews of this score yet. Please .
In order to submit this score to ScoreExchange.com Taylor Silver has declared that they own the copyright to this work in its entirety or that they have been granted permission from the copyright holder to use their work. If you believe that this score should be not available here because it infringes your or someone elses copyright, please report this score using the copyright abuse form.