By: G Fauré
For: Quintet of Clarinets in Bb
This music is in your basket
View basket
Loading... 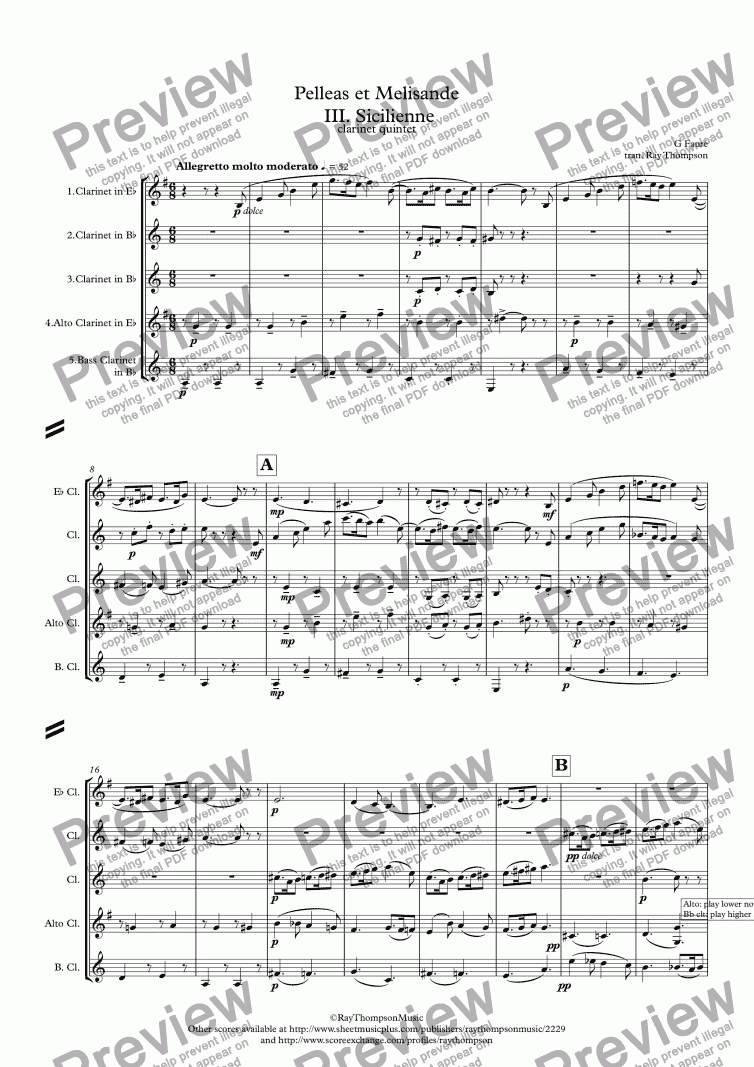 By: G Fauré
For: Quintet of Clarinets in Bb

Composer
G Fauré
Arranger
RayThompsonMusic
Publisher
RayThompsonMusic
Difficulty
Difficult (Grades 7+)
Duration
3 minutes
Genre
Classical music
License details
For anything not permitted by the above licence then you should contact the publisher first to obtain permission.

Sicilienne, Op. 78, is a composition for cello and piano by French composer Gabriel Fauré.

It was originally composed as part of the incidental music for Molière’s Le Bourgeois gentilhomme, but the piece was never used for it. It appeared as part of the incidental music the first English production of Maurice Maeterlinck’s play, Pelléas et Mélisande, and in the suite prepared for separate performance by the composer. In addition, it was published as a solo for cello (or violin) with piano accompaniment dedicated to the British cellist William Henry Squire (1871-1963).

Arrangements have been made for many instruments, accompanied usually by piano though sometimes by the harp or guitar. Perhaps the best known is that for flute and piano by Henri Büsser.

I hve arranged it for clarinet quintet, from Faure’s orchestral arrangement. (Eb, 2 Bb, alto and bass) (Optional Bb parts are provided for both the Eb and the alto, so the arrangement would work with 4 Bb and bass.

I made the decision to arranging it as though it had been composed for winds. I have omitted the piano/harp arpeggio, and instead have given sustaining notes (mostly to the alto). This still, I feel ,maintains the ethereal sound of the piece.