By: Jay Anthony Gach
For: Solo instrument (Piano)
This music is in your basket
View basket
Loading... 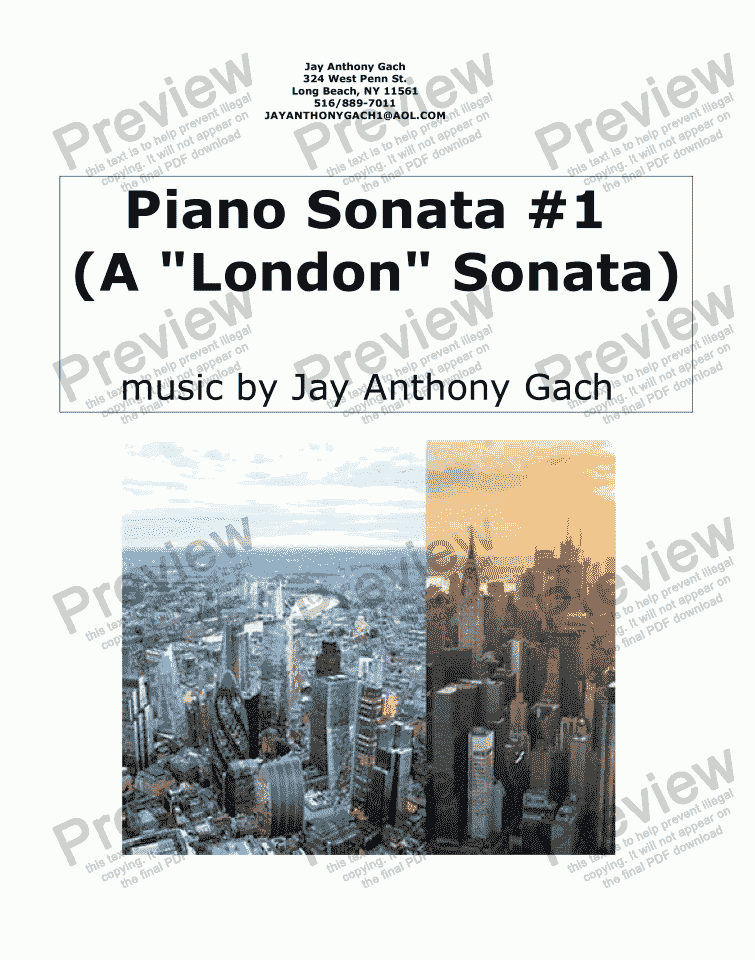 Composer
Jay Anthony Gach
Year of composition
1992
Lyricist
none
Difficulty
Difficult (Grades 7+)
Duration
14 minutes
Genre
Modern classical music
License details
For anything not permitted by the above licence then you should contact the publisher first to obtain permission.

from CD "Piano Music+" by Jay Anthony GACH Pianist, Steven Neugarten NB 1) newly revised ending last couple of measures) not in recording. 2) I’ve made a cut - not reflected in the music or recording - mm.159-173 have been excised and sent to music hades; the sin, overkill! If larger print score is wished please contact me at the above email. Gratis To answer the silly review of 14th Oct 2003 that appears at the bottom, in 1994 alone this sonata was played by five different pianists in over thirty recitals in England, Wales and Holland.

NOTES The title of my first, large scale piece for solo piano perhaps, best describes what the piece is not rather than what it is. Formally, it bears no resemblance to traditional sonata form and there is nothing ?Londonish? about the musical materials. But I did write the piece while living in London and even today the term sonata can still be useful in suggesting the scope of large-scale solo pieces.

Of the many kinds of music presented in this sonata I should point out the appearance of a Mormon hymn ? partly authentic, partly recomposed by me ?which serves as the signpost announcing the final section of the sonata. This entire section is written in memory of Aaron Copland who died around the time I was composing this sonata. He was very fond of American hymns and spirituals and, indeed, his most heartfelt music effects the spirit and piety of this genuine tradition.

I like to think of my London Sonata as continuing a kind of music tradition having its most immediate roots in the piano music of Samuel Barber, Leonard Bernstein and Aaron Copland: three of many American composers who sought to forge an American School of composition and whose later careers suffered unjustly during the nihilistic ascendancy of twelve-tone music in the USA. JAG 93

Sorry, there's no reviews of this score yet. Please .
In order to submit this score to ScoreExchange.com Jay Anthony Gach has declared that they own the copyright to this work in its entirety or that they have been granted permission from the copyright holder to use their work. If you believe that this score should be not available here because it infringes your or someone elses copyright, please report this score using the copyright abuse form.