By: tim ellis
For: Solo instrument (Piano)
This music is in your basket
View basket
Loading... 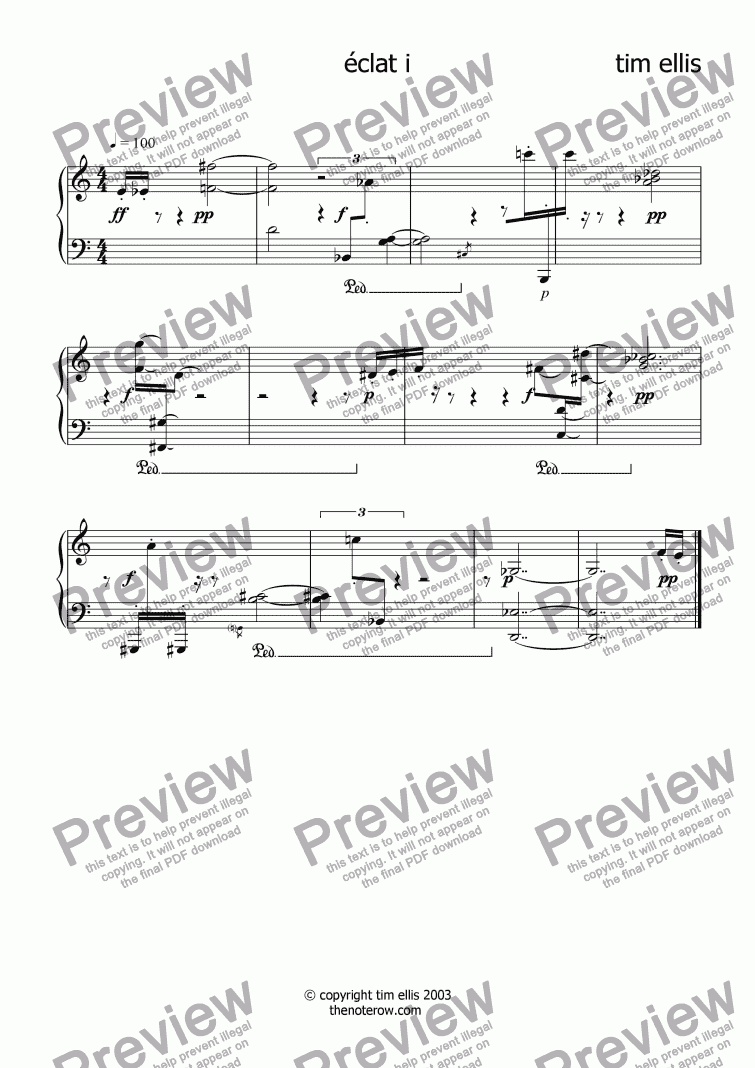 Composer
tim ellis
Year of composition
2003
Lyricist
none
Difficulty
Moderate (Grades 4-6)
Duration
3 minutes
Genre
Modern classical music
License details
For anything not permitted by the above licence then you should contact the publisher first to obtain permission.

?clats is a set of piano miniatures. The music is derived from a 12-note series. After years of relative silence in composition, I view this as my true ?Opus 1?, warts and all.

Although ?clat can mean brightness or brilliance it can also mean a splinter of glass. It is this dual meaning I have in mind for the music. Either the note row is shattered into melodic fragments or the matrix itself is broken.

?clat i is a rhythmic palindrome. The notes are taken following the outside of the matrix centred on E.

?clat ii is an exploration of bell sounds. As I was writing it the death was announced of Michael Oliver. He was an intelligent critic and broadcaster and I dedicate this piece to his memory. It only uses the first 5 notes of the note row in a 5 square matrix centred on B flat.

?clat iii uses a seven square matrix again based on B flat. Its form is a simple palindrome. The music in the right hand explodes, contrasting against the introspective music of the left hand.

?clat iv is a scherzo, all over in six seconds.

?clat vi rotates the row centred on E flat. The music is a three part ritual. This is a decorated equivalent to the static bell sounds of ?clat ii.

Sorry, there's no reviews of this score yet. Please .
In order to submit this score to ScoreExchange.com tim ellis has declared that they own the copyright to this work in its entirety or that they have been granted permission from the copyright holder to use their work. If you believe that this score should be not available here because it infringes your or someone elses copyright, please report this score using the copyright abuse form.