THE GATES OF TRAQUAIR 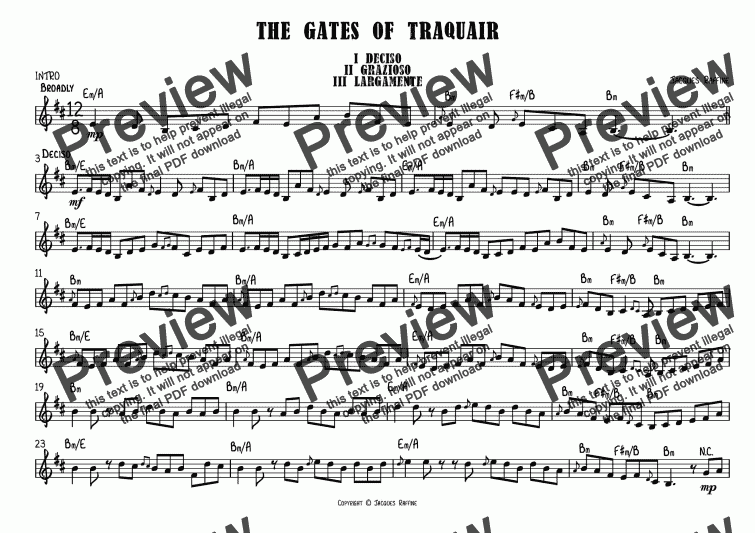 THE GATES OF TRAQUAIR The music recalls the story of the visit of Prince Charles Edward Stuart (Bonnie Prince Charlie) to Traquair House in the Scottish Borders. It was Autumn 1745 and he was gathering support for his attempt to take the throne of Great Britain. The 5th Earl gave support and declared that the gates of the House would not be opened until a Stuart monarch, crowned in London, returned.

They were not to know that the Jacobite cause would be lost at Culloden just a few months later.

The several distinct items in the music are…

Bar 3 – martial strength and optimism, with variations over a repeated drone pattern Bar 27 – a nod to the lighter Italian music of the Stuart prince’s background Bar 32 – a more cautious reprise of the original theme Bar 41 – on reflection

In order to submit this score to ScoreExchange.com derek j sheldon has declared that they own the copyright to this work in its entirety or that they have been granted permission from the copyright holder to use their work. If you believe that this score should be not available here because it infringes your or someone elses copyright, please report this score using the copyright abuse form.

Reviews of THE GATES OF TRAQUAIR