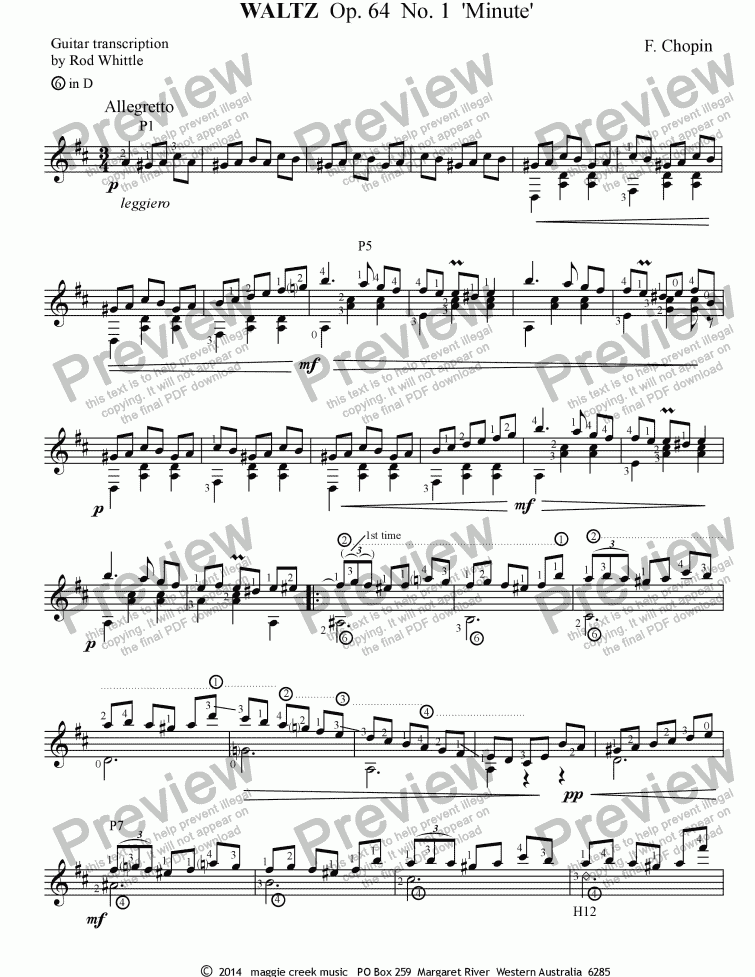 Chopin was born in Poland but spent his twenty or so creative years based in Paris. A master of the keyboard and a composer of genius he in ways personified the Romantic era, although he cited his main influences as Bach and Mozart and advocated a singing style of performance free of exaggeration. Afflicted early on by consumption, he worked with a tireless intensity to produce piano compositions both intricate and perfect, of every style and mood. Pears Cyclopaedia has this accurate summation: ‘A Chopin melody, limpid, transparent, singing, can be recognised easily by anyone, but his style gradually developed into something more subtle, more satisfying than pure melody.’

Chopin's waltzes (36 in all, of which the 'Minute' is probably the most famous) were designed for concert performance rather than dancing. Although it is one of his later compositions, the 'Minute', written in 1847 for Countess Delfine Potocka, is not complicated in either its form (ternary) or harmony. Nevertheless it exhibits typical Chopin quirkiness with its use of ornaments and triplets and in its harmonic shifts. As ever, a recognisable beauty unfolds to which the dynamics are intrinsic.

The nickname 'Minute' does not refer to the duration, but the size of the piece. It is marked molto vivace on the piano music, but I have left the tempo unspecified – better technique will allow faster playing if that is desired. Chopin was the opposite of pedantic with respect to such things, and reportedly played his pieces at various tempos, advocating whatever would optimise musical intent.