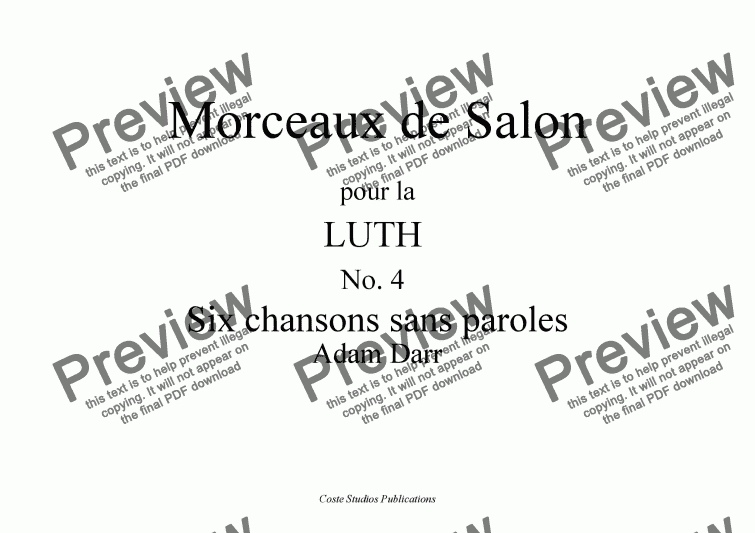 Six Chansons sans Paroles (Six Songs without words) is the fourth piece in a series of 12 concert works under the title of Morceaux de Salon pour la Luth par A. Darr. This set of six miniatures falls directly in the tradition of Robert Schumann. In keeping with the nineteenth-century German Romantic tradition each piece is given a programmatic title: 1. Die Erwartung (The Expectation), 2. Der Abschied (The Farwell), 3. Die Trauernde (The Weeper), 4. Das Wiedershen (The Reunion), 5. Im Kahne (In the Boat) 6. Im Walde (In the Forest). For the mp3 I used the �Alpine Zither� sample from Precisionsound with Logic Pro�s EXS24 sampler and some Space Designer convoluted reverb. Zither players need to be aware that Darr�s zither tuning is different that of today�s modern instrument. For a historically accurate performance, string #10 must be tuned and octave higher, while strings # 17, 19, and 22 must be tuned an octave lower than today�s tuning standard. In an effort to bring some clarity and brevity to the notation, I have used some guitar designations. The fretboard strings are designated as Arabic numerals inside of a circle and orders from the highest string (a) number 1 to the lowest string © number 5. Harmonics are designated with diamond note heads at pitch, with a string number and fret number. Although this is a departure from past practices, I believe it adds clarity and a certain amount of uniformity with other classical instrument notation. For more information on Darr see my DMA research paper "ADAM DARR (1811-1866) THE CAREER AND WORKS OF A GERMAN ROMANTIC GUITARIST AND ZITHERIST."