By: Jacob Obrecht
For: Trio of Altos
This music is in your basket
View basket
Loading... 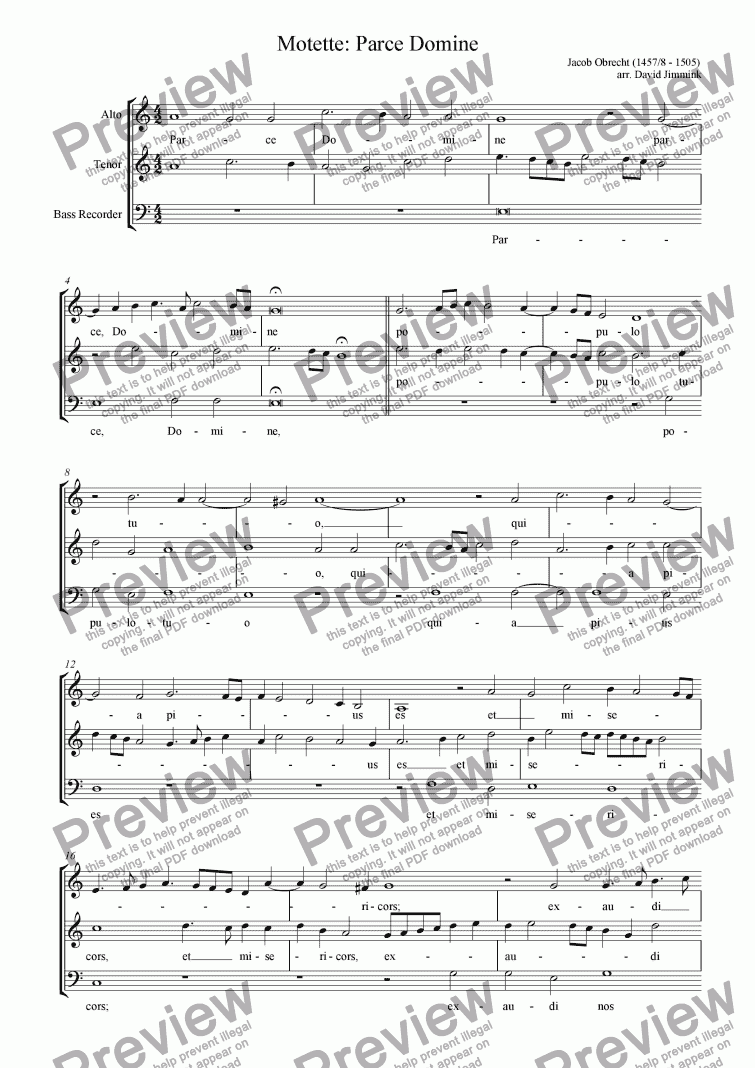 By: Jacob Obrecht
For: Trio of Altos

Composer
Jacob Obrecht
Arranger
David Jimmink
Lyricist
anon.
Difficulty
Moderate (Grades 4-6)
Duration
2 minutes
Genre
Classical music
License details
For anything not permitted by the above licence then you should contact the publisher first to obtain permission.

I played and sang this music with the theatre/music-ensemble Pipelare, which played mostly early music.

Jacob Obrecht was born in either 1457 or 1458, the only son of Gent city trumpeter Willem Obrecht and Lijsbette Gheeraerts. His mother died in 1460 at the age of 20. His portrait, painted in 1496, gives his age as 38, establishing his birthdate.

Details of his early education are sparse, but he likely learned to play the trumpet, like his father, and in so doing learned the art of counterpoint and improvisation over a cantus firmus. Most likely he knew Antoine Busnois at the Burgundian court; at any rate he certainly knew his music, since his earliest mass shows close stylistic parallels with the elder composer.

Obrecht seems to have had a succession of short appointments, many of which ended in less than ideal circumstances. At least twice he was in trouble for financial irregularities, more likely from careless bookkeeping than anything else, and there is one interesting record of his covering a shortfall in his accounts by a donation of his compositions to his employer. Throughout the period, though as an employee he may have been undesirable, he was held in the highest respect both by his patrons and by the composers who were his peers. Tinctoris, who was writing in Naples, singles him out in a short list of the master composers of the day�all the more significant because he was only 25 at the time Tinctoris made his list, and on the other side of Europe.

While most of Obrecht's appointments were in Flanders or the Netherlands, he made at least two trips to Italy, once in 1487 at the invitation of Duke Ercole I d'Este of Ferrara, and again in 1505. Duke Ercole had heard Obrecht's music, which is known to have circulated in Italy between 1484 and 1487, and said that he appreciated it above the music of all other contemporary composers; consequently he invited Obrecht to Ferrara for six months in 1487.

In 1504 Obrecht once again went to Ferrara, but on the death of the Duke at the beginning of the next year he became unemployed. In what capacity he stayed in Ferrara is unknown, but he died in the outbreak of plague there just before August 1, 1505.

Sorry, there's no reviews of this score yet. Please .
In order to submit this score to ScoreExchange.com David Jimmink has declared that they own the copyright to this work in its entirety or that they have been granted permission from the copyright holder to use their work. If you believe that this score should be not available here because it infringes your or someone elses copyright, please report this score using the copyright abuse form.