By: Rory Braddell
For: Piano trio
This music is in your basket
View basket
Loading... 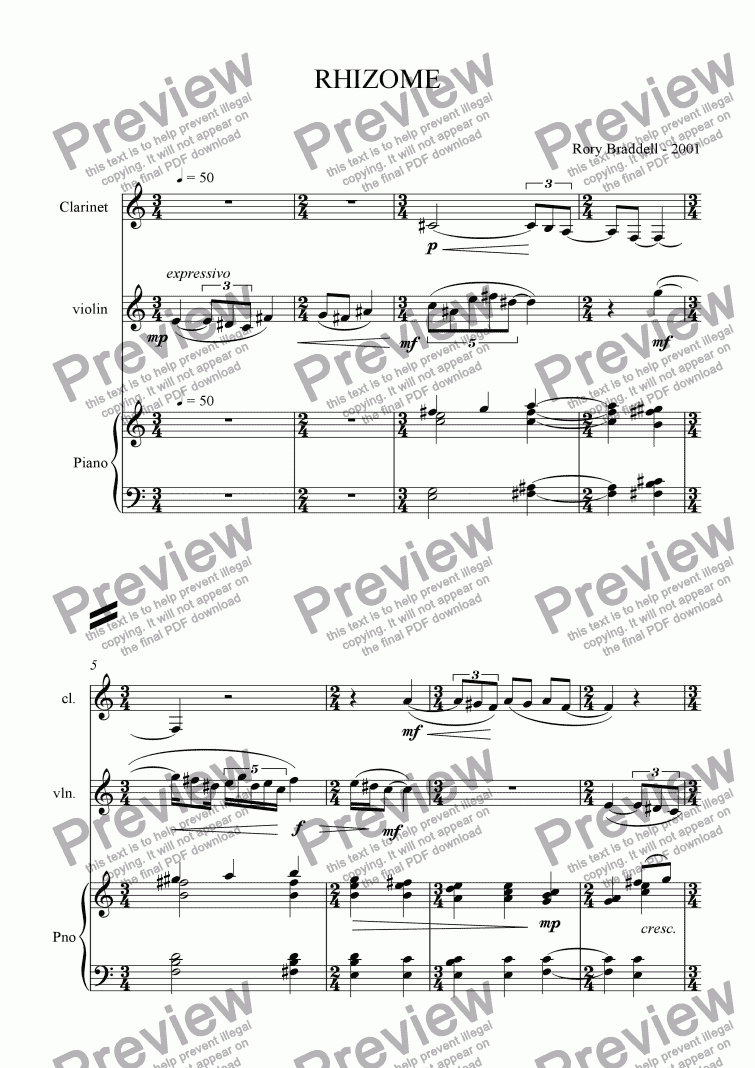 By: Rory Braddell
For: Piano trio

Composer
Rory Braddell
Year of composition
2001
Lyricist
none
Difficulty
Difficult (Grades 7+)
Duration
4 minutes
Genre
Modern classical music
License details
For anything not permitted by the above licence then you should contact the publisher first to obtain permission.

Several compositional ideas are explored in this work and are sustained throughout. The first is the extensive use of quintuplets, which give the instrumental parts fluid rhythmical character. The second idea is the derivation of a six-note scale that generates much of the instrumental writing. In the opening section the violin uses a scale of six notes (C, D#, E, F#, G & A#), while the clarinet explores other unused pitches (F, G#, A, B, C#). Despite extensive chromatic writing, it is the six-note scale that forms the generative seed of the entire work, and these pitches are given a high degree of prominence. The clarinet and violin are set against the harmonic language of the piano accompaniment. My intention was to create a static cycle of chords, which would act as a backdrop for the instrumental dialogue, eventually repeating itself. A rhizome is a horizontal, root-like stem that extends underground and sends out shoots to the surface. Deleuze and Guattari used the term to describe types of non-hierarchical networks. The rhizome is reducible to neither one nor the multiple; It is composed not of units but of dimensions, or rather directions in motion. (A Thousand Plateaus, 1987, p.21). The character of the work is defined by elements that are non-hierarchical in nature and hence to a certain degree rhizomatic. Musical composition may be perceived as an assemblage, as the outcome of several different elements, which provide levels of expression and content for one another through their inter-connectivity. This composition was primarily influence by my interest in Messiaen and the manner in which he combined clarinet, violin and piano in the Quartet for the End of Time. Another influence on this work was Bartok's use of Bitonality in his piano music and the idea of the simultaneous use of mutually exclusive pitch sets.

Performance Notes: The piece is notated without a key signature. All accidentals follow the normal conventions, in which the accidental marking holds true for the entire bar it appears in. The piece requires a B-Flat clarinet, but this score is notated in the actual pitch, rather than the transposed version.

Sorry, there's no reviews of this score yet. Please .
In order to submit this score to ScoreExchange.com Rory Braddell has declared that they own the copyright to this work in its entirety or that they have been granted permission from the copyright holder to use their work. If you believe that this score should be not available here because it infringes your or someone elses copyright, please report this score using the copyright abuse form.