By: Composed by Glenn Miller (1904-1944) Arranged by Keith Terrett
For: Large mixed ensemble
This music is in your basket
View basket
Loading... 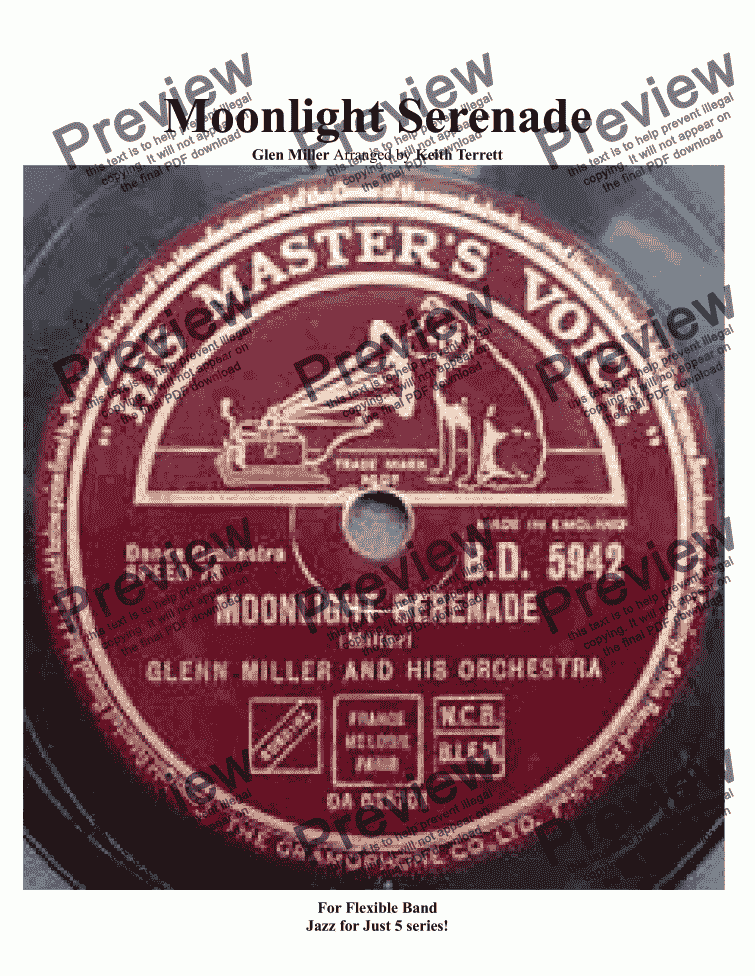 By: Composed by Glenn Miller (1904-1944) Arranged by Keith Terrett
For: Large mixed ensemble

Composer
Composed by Glenn Miller (1904-1944) Arranged by Keith Terrett
Year of composition
1938
Arranger
Keith Terrett
Year of arrangement
2017
Publisher
Music for all Occasions
Difficulty
Moderate (Grades 4-6)
Duration
2 minutes
Genre
Jazz music
License details
For anything not permitted by the above licence then you should contact the publisher first to obtain permission.

"Moonlight Serenade" arranged for Flexible Band, is an American swing ballad composed by Glenn Miller with subsequent lyrics by Mitchell Parish. It was an immediate phenomenon when released in May 1939 as an instrumental arrangement, though it had been adopted and performed as Miller's signature tune as early as 1938, even before it had been given the name "Moonlight Serenade." In 1991, Miller's recording of "Moonlight Serenade" was inducted into the Grammy Hall of Fame.

The song was recorded on April 4, 1939 for on RCA Bluebird. It was a Top Ten hit on the U.S. pop charts in 1939, reaching number three on the Billboard charts, where it stayed for fifteen weeks. It was the number 5 top pop hit of 1939 in the Billboard year-end tally. Miller had five records in the top 20 songs of 1939 on the Billboard list.

In the UK, "Moonlight Serenade" was released as the A-side of a 78 for His Master's Voice with "American Patrol" as the B-side. The recording reached number twelve in the UK in March 1954, staying on the chart for one week. In a medley with "Little Brown Jug" and "In the Mood", "Moonlight Serenade" reached number thirteen on the UK charts in January 1976, in a chart run of eight weeks. The recording was also issued as a V-Disc in November 1943. The beauty of my Jazz for Just 5 Series, is that all arrangements in the series do precisely that!

Amazing Grace, Battle Hymn of the Republic, That's A Plenty, When the Saints Go Marching In & Little Brown Jug.

The live MP3 was made by Clarinet Fusion in the USA.