By: Composed by Julia Ward Howe Arranged by Keith Terrett
For: Large mixed ensemble
This music is in your basket
View basket
Loading... 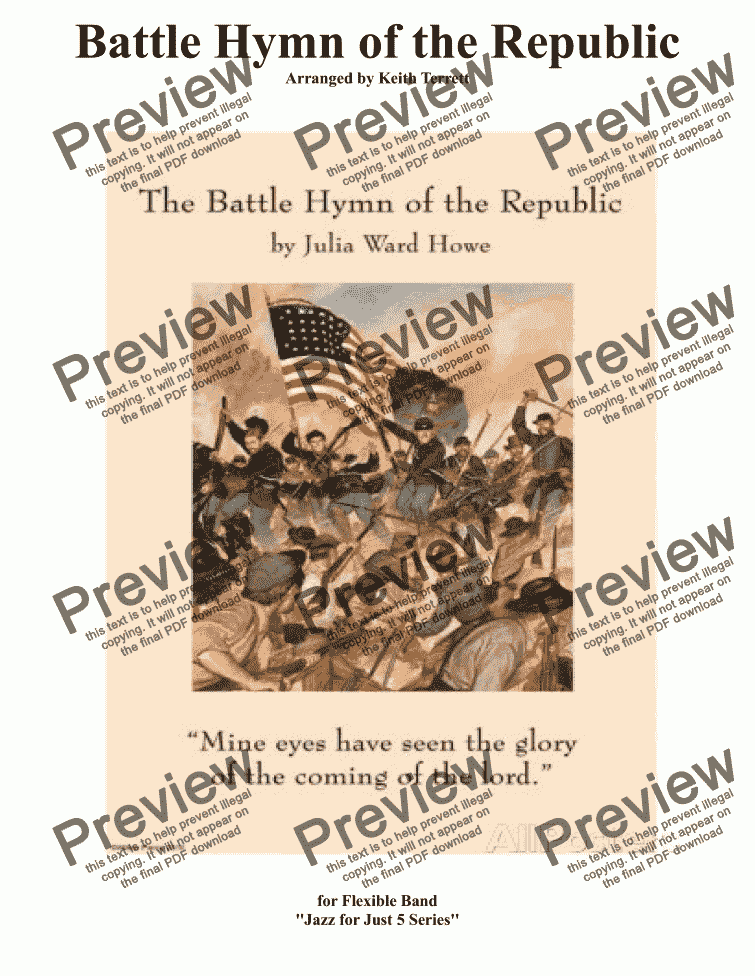 Composer
Composed by Julia Ward Howe Arranged by Keith Terrett
Arranger
Keith Terrett
Year of arrangement
2017
Publisher
Music for all Occasions
Difficulty
Moderate (Grades 4-6)
Duration
2 minutes
Genre
Jazz music
License details
For anything not permitted by the above licence then you should contact the publisher first to obtain permission.

Arranged for Flexible Band the "Battle Hymn of the Republic", also known as "Mine Eyes Have Seen the Glory" outside of the United States, is a lyric by the American writer Julia Ward Howe using the music from the song "John Brown's Body". Howe's more famous lyrics were written in November 1861 and first published in The Atlantic Monthly in February 1862. The song links the judgment of the wicked at the end of the age (Old Testament, Isaiah 63; New Testament, Revelation 19) with the American Civil War. Since that time, it has become an extremely popular and well-known American patriotic song.

The "Glory, Hallelujah" tune was a folk hymn developed in the oral hymn tradition of camp meetings in the southern United States and first documented in the early 1800s. In the first known version, "Canaan's Happy Shore," the text includes the verse "Oh! Brothers will you meet me (3×)/On Canaan's happy shore?" and chorus "There we'll shout and give him glory (3×)/For glory is his own"; this developed into the familiar "Glory, glory, hallelujah" chorus by the 1850s. The tune and variants of these words spread across both the southern and northern United States.

Kimball's battalion was dispatched to Murray, Kentucky, early in the Civil War, and Julia Ward Howe heard this song during a public review of the troops outside Washington, D.C., on Upton Hill, Virginia. Rufus R. Dawes, then in command of Company "K" of the 6th Wisconsin Volunteer Infantry, stated in his memoirs that the man who started the singing was Sergeant John Ticknor of his company. Howe's companion at the review, The Reverend James Freeman Clarke, suggested to Howe that she write new words for the fighting men's song. Staying at the Willard Hotel in Washington on the night of November 18, 1861, Howe wrote the verses to the "Battle Hymn of the Republic." Of the writing of the lyrics, Howe remembered:

I went to bed that night as usual, and slept, according to my wont, quite soundly. I awoke in the gray of the morning twilight; and as I lay waiting for the dawn, the long lines of the desired poem began to twine themselves in my mind. Having thought out all the stanzas, I said to myself, "I must get up and write these verses down, lest I fall asleep again and forget them." So, with a sudden effort, I sprang out of bed, and found in the dimness an old stump of a pen which I remembered to have used the day before. I scrawled the verses almost without looking at the paper.

Howe's "Battle Hymn of the Republic" was first published on the front page of The Atlantic Monthly of February 1862. The sixth verse written by Howe, which is less commonly sung, was not published at that time. The song was also published as a broadside in 1863 by the Supervisory Committee for Recruiting Colored Regiments in Philadelphia.

Both "John Brown" and "Battle Hymn of the Republic" were published in Father Kemp's Old Folks Concert Tunes in 1874 and reprinted in 1889. Both songs had the same Chorus with an additional "Glory" in the second line: "Glory! Glory! Glory! Hallelujah!"

Julia Ward Howe was married to Samuel Gridley Howe, the famed scholar in education of the blind. Samuel and Julia were also active leaders in anti-slavery politics and strong supporters of the Union. Samuel Howe was a member of the Secret Six, the group who funded John Brown's work.

Enjoy the live recording made by Clarinet Fusion in the USA!