By: Jeremiah Clarke
For: Brass quintet
This music is in your basket
View basket
Loading... 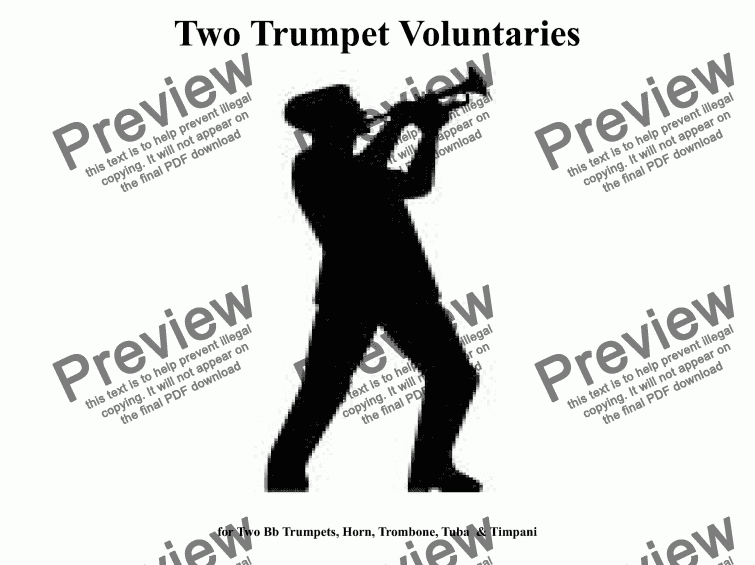 By: Jeremiah Clarke
For: Brass quintet

Composer
Jeremiah Clarke
Year of composition
1748
Arranger
Keith Terrett
Year of arrangement
2007
Publisher
Music for all Occasions
Difficulty
Difficult (Grades 7+)
Duration
3 minutes
Genre
Classical music
License details
For anything not permitted by the above licence then you should contact the publisher first to obtain permission.

A version of Jeremiah Clarke’s Trumpet Voluntary & Trumpet Tune arranged for classical brass quintet, a tone lower then the professional version; enabling players not so confident in the extreme clarino register to perform this exciting arrangement.

For many years, the piece was attributed incorrectly to his elder, and more widely known, contemporary, Henry Purcell, who was organist of Westminster Abbey. The mis-attribution emanated from an arrangement for organ published in the 1870s by Dr. William Spark, then town organist of Leeds, England. It was later adopted by Sir Henry Wood in his well known arrangement for trumpet, string orchestra, and organ.

These two melodies are often mis-attributed to Henry Purcell.

Trumpet Voluntary is from a harpsichord suite, whereas Trumpet Tune is from The Island Princess.

Trumpet Voluntary was very popular in England during the late Victorian era, and was performed during the ’’Prom’’ concerts conducted by Henry Wood.