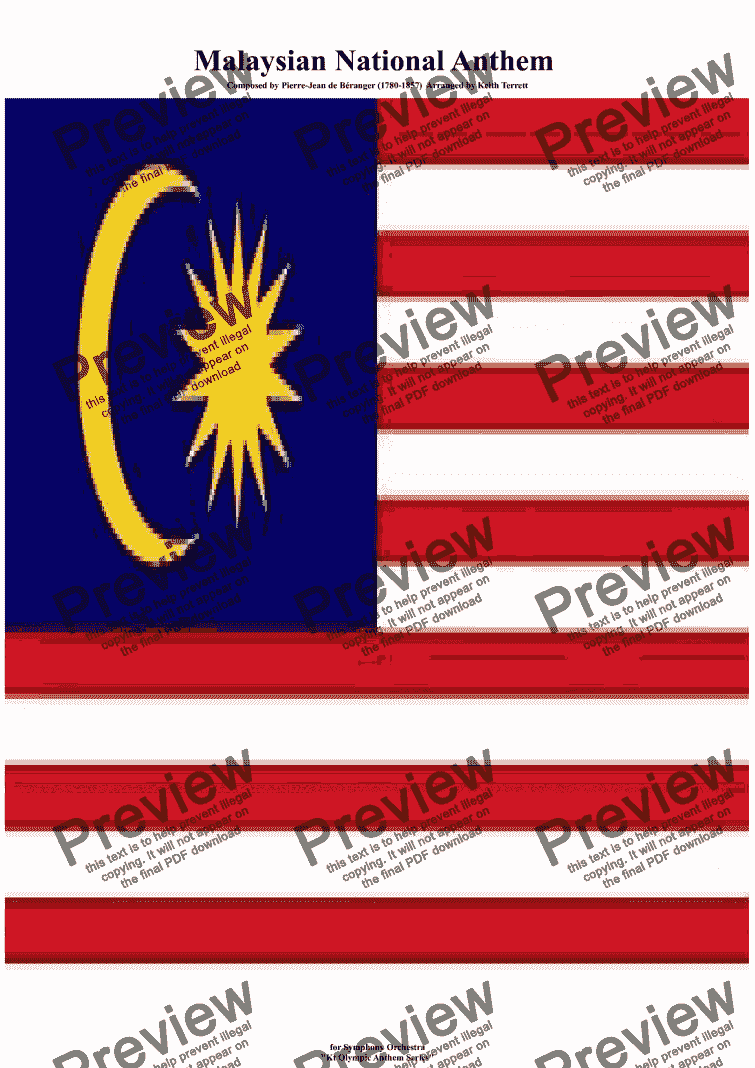 Arranged for Symphony Orchestra "Negaraku" (English: "My Country") is the national anthem of Malaysia. It was selected as a national anthem at the time of the Federation of Malaya's independence from the UK in 1957. The tune was originally used as the regional anthem of Perak,which was adopted from a popular French melody titled "La Rosalie" composed by the lyricist Pierre-Jean de Béranger.

There are versions for Brass Quintet & String Orchestra in my on-line stores.

In 1888 the Sultan of Perak was invited by Queen Victoria as a guest. When the Sultan’s aide was asked what the anthem of Perak was, so that it could be played upon his formal arrival, the aide, not wanting to be embarrassed by saying that Perak did not have an anthem, perhaps giving the impression that his country was “backwards”, proceeded to hum a favourite tune of his from the Seychelles, which is believed to have been composed by Pierre Jean Beranger. It was, therefore, from that moment on, the tune for the state anthem of Perak.

After an Indonesian opera performed it in Singapore (at the time, part of Malaysia), the tune became popular throughout all of Malaysia in the 1920s and 1930s as the love song “Terang Bulan” (Moonlight). (“Terang Bulan” is now forbidden to be performed in Malaysia.)

Before independence was scheduled for Malaysia in 1957, each of the (then) eleven states of Malaysia had their own anthem (which they have retained to this day), but there was no unifying anthem for the whole country. When independence was approaching, Tunku Abdul Rahman, then the Chief Minister and Minister for Home Affairs (later Malaysia’s first prime minister), led a committee to select a new anthem. Hundreds were recieved, but none were deemed suitable. Finally, the anthem for the Malaysian state of Perak was considered, and the melody, due to its “traditional flavour” was selected to be the melody for the new anthem.

Once the melody was selected, new lyrics had to be written for it. The panel of judges charged with selecting a new anthem wrote the lyrics, with Tunku Abdul Rahman leading the group.

In 1992, the anthem was rearranged to give it a livelier, march rhythym, which was unpopular with the citizens. In 2003 the tempo was returned to what it was originally.