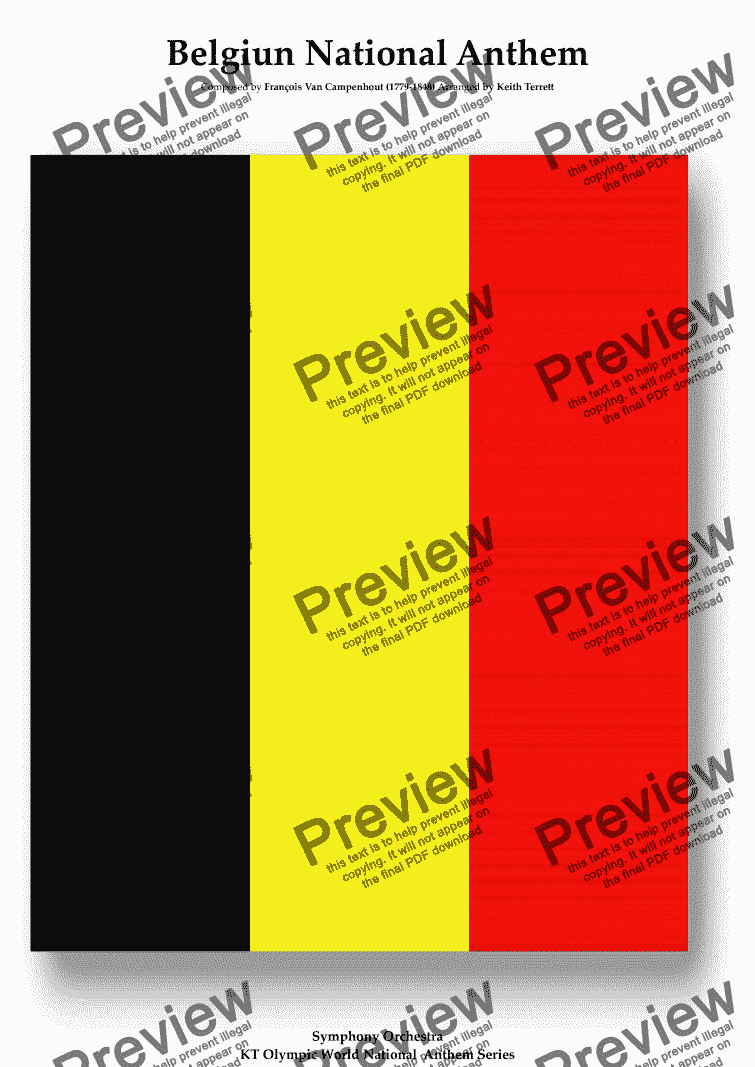 An arrangement for Symphony Orchestra of "La Brabançonne" (French: [la bʁabɑ̃sɔn]; Dutch: "De Brabançonne"; German: "Das Lied von Brabant") is the national anthem of Belgium. The originally-French title refers to Brabant; the name is usually maintained untranslated in Belgium's other two official languages, Dutch and German. There are alternative versions for Brass Quintet & String Orchestra in my stores.

According to legend, the Belgian national anthem was written in September 1830, during the Belgian Revolution, by a young revolutionary called "Jenneval", who read the lyrics during a meeting at the Aigle d'Or café.

Jenneval, a Frenchman whose real name was Alexandre Dechet (sometimes known as Louis-Alexandre Dechet), did in fact write the Brabançonne. At the time, he was an actor at the theatre where, in August 1830, the revolution started which led to independence from the Netherlands. Jenneval died in the war of independence. François van Campenhout composed the accompanying score, based on the tune of a French song called "L'Air des lanciers polonais" ("the tune of the Polish Lancers"), written by the French poet Eugène de Pradel, whose tune was itself an adaptation of the tune of a song, "L'Air du magistrat irréprochable", found in a popular collection of drinking songs called La Clé du caveau (The Key to the cellar) and it was first performed in September 1830.

The ending, pledging loyalty to "Le Roi, la Loi, la Liberté!" ("The King, and Law, and Liberty!") is an obvious parallel to the French "Liberté, Égalité, Fraternité" – with the republican sentiment of the original replaced in the Belgian version by the promotion of constitutional monarchy (the combination of "The King" and "(the) Law" is what produces "Liberty"). Actually, a slogan similar to the Belgian one – "la Nation, la Loi, le Roi" ("The Nation, The Law, The King") – had been used in the early days of the French Revolution, when that revolution was still considered to be aimed toward constitutional monarchy rather than a republic.

The Brabançonne is also a monument (1930) by the sculptor Charles Samuel on the Surlet de Chokier square in Brussels. The monument contains partial lyrics of both the French and Dutch versions of the anthem. Like many elements in Belgian folklore, this is mainly based on the French "La Marseillaise" which is also both an anthem and the name of a monument – the sculptural group Departure of the Volunteers of 1792, commonly called La Marseillaise, at the base of the Arc de Triomphe in Paris.

For more of my original music, great arrangements and all the national anthems of the world, check out my on-line stores: https://www.scoreexchange.com/profiles/keithterrett1 http://www.sheetmusicplus.com/search?Ntt=keith+terrett Need an anthem fast? They are ALL in my store! All my anthem arrangements are also available for Orchestra, Recorders, Saxophones, Wind, Brass and Flexible band. If you need an anthem urgently for an instrumentation not in my store, let me know via e-mail, and I will arrange it for you FOC if possible! keithterrett@gmail.com If you perform this arrangement in public, make a recording or broadcast it through any media, please notify the PRS (UK), or ASCAP (USA), or SOCAN (Canada), or APRA (Australia) or KODA (Denmark) or the equivalent organisation in your own country, giving the name of the arranger as Keith Terrett. Love national anthems, then join me on twitter, facebook, instagram & soundcloud for frequent updates on my anthem arrangements. 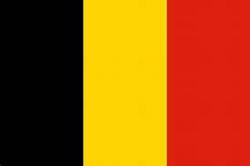 I am hooked on Keith's national anthem arrangements, and consequently would love to hear them performed live at the Commonwealth, South Pacific or Olympic Games.

Every arrangement has great harmony, subtle changes of orchestration while keeping the integrity of the melody intact.

In comparison with previous arrangements by Peter Breiner & Sheppard