By: Composed Unknown
For: String orchestra
This music is in your basket
View basket
Loading... 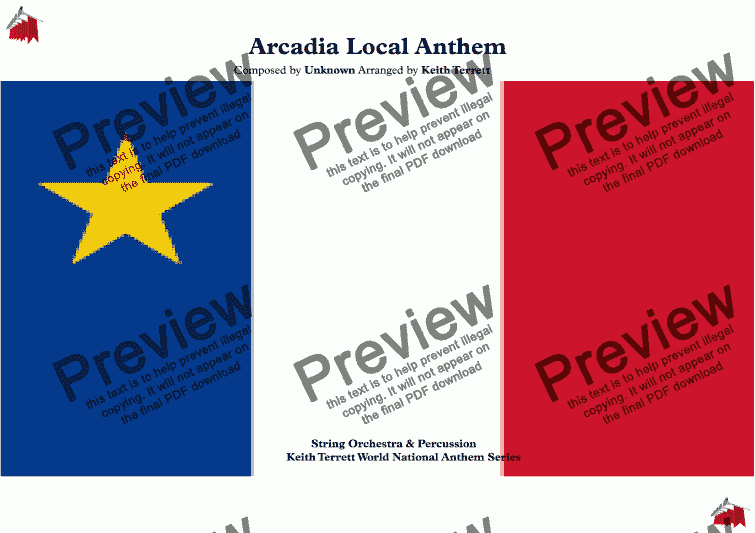 By: Composed Unknown
For: String orchestra

Composer
Composed Unknown
Arranger
Keith Terrett
Year of arrangement
2019
Publisher
Music for all Occasions
Difficulty
Moderate (Grades 4-6)
Duration
1 minute
Genre
Classical music
License details
For anything not permitted by the above licence then you should contact the publisher first to obtain permission.

An arrangement of the local anthem of Arcadia for String Orchestra with optional percussion parts. There is a version for Brass Quintet in my store.

Acadia is the French speaking area of eastern North America, primarily in the Maritime provinces of Canada. “Ave Maris Stella” dates back to the eigth century as a Catholic hymn to the Virgin Mary and, as such, the lyrics are originally in Latin. Because of the Catholic background of Acadians, the song was chosen at the Acadian national congress of 1884 as the Acadian anthem. According to the minutes of the meeting, once the flag had been introduced to the delegates by Father Richard, he started singing the Ave Maris Stella as if to close the congress. It was then declared that a song was needed, and it was determined that because “Ave, Maris Stella” was chosen by Fr. Richard to sing at that time, that it should be the Acadian anthem. The resolution was submitted in the ongoing session, where the assembly approved it.

At the 1992 meeting of the Société Nationale de l’Acadie, the anthem was revised somewhat, the first and last verses of the original Latin lyrics were kept out of respect for the original hymn, but the second, third and fourth verses were now in French (the language spoken in Acadia), the lyrics being a winning entry of a contest.

For more of my original music, great arrangements and all the national anthems of the world, check out my on-line stores: http://www.scoreexchange.com/profiles/keith_terret http://musicforalloccasions.org.uk http://www.sheetmusicplus.com/search?Ntt=keith+terrett Need an anthem fast? They are ALL in my store! All my anthem arrangements are also available for Orchestra, Recorders, Saxophones, Wind, Brass and Flexible band. If you need an anthem urgently for an instrumentation not in my store, let me know via e-mail, and I will arrange it for you FOC if possible! keithterrett@gmail.com