By: Jacques Offenbach
For: Quartet
This music is in your basket
View basket
Loading... 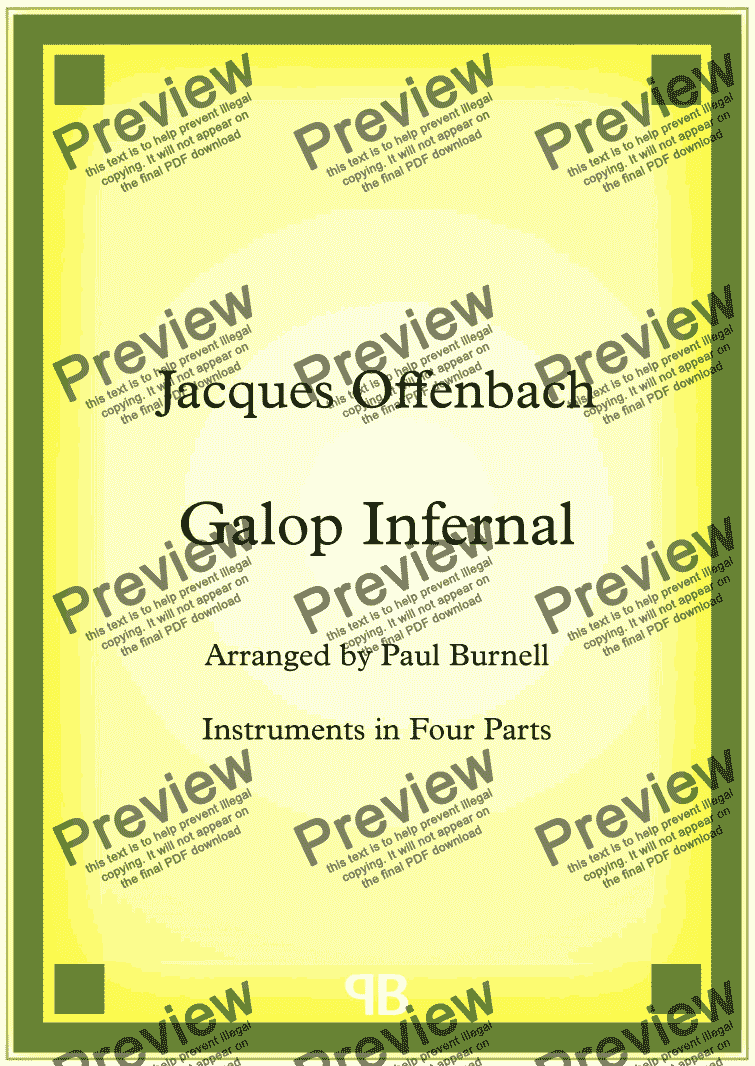 By: Jacques Offenbach
For: Quartet

Composer
Jacques Offenbach
Year of composition
1858
Arranger
Paul Burnell
Year of arrangement
2019
Difficulty
Moderate (Grades 4-6)
Duration
2 minutes
Genre
Classical music
License details
For anything not permitted by the above licence then you should contact the publisher first to obtain permission.

The arrangement is suitable for multiple quartet combinations with parts available (and potential instrumentations suggested) as follows:

Any other appropriate instruments, even if not suggested above, may play.

Part 4 may be played an octave lower than written.

Although the score is presented with layout appropriate for a brass quartet of two Cornets in Bb, Tenor horn in Eb and Trombone in treble clef with Bb transposition this does not indicate a preferred instrumentation.

The 'Galop Infernal' appears in the comic opera 'Orphée aux enfers' ('Orpheus in the Underworld') composed by Jacques Offenbach (1819 - 1880) and first performed in Paris in 1858.

After Offenbach's death the ‘Galop Infernal’ became one of the world's most famous pieces of music, when the Moulin Rouge and the Folies Bergère adopted it as the regular music for their can-can.

Reviews of Galop Infernal, arranged for instruments in four parts - Score and Parts

Sorry, there's no reviews of this score yet. Please .
In order to submit this score to ScoreExchange.com Paul Burnell has declared that they own the copyright to this work in its entirety or that they have been granted permission from the copyright holder to use their work. If you believe that this score should be not available here because it infringes your or someone elses copyright, please report this score using the copyright abuse form.