Mother of the Blues 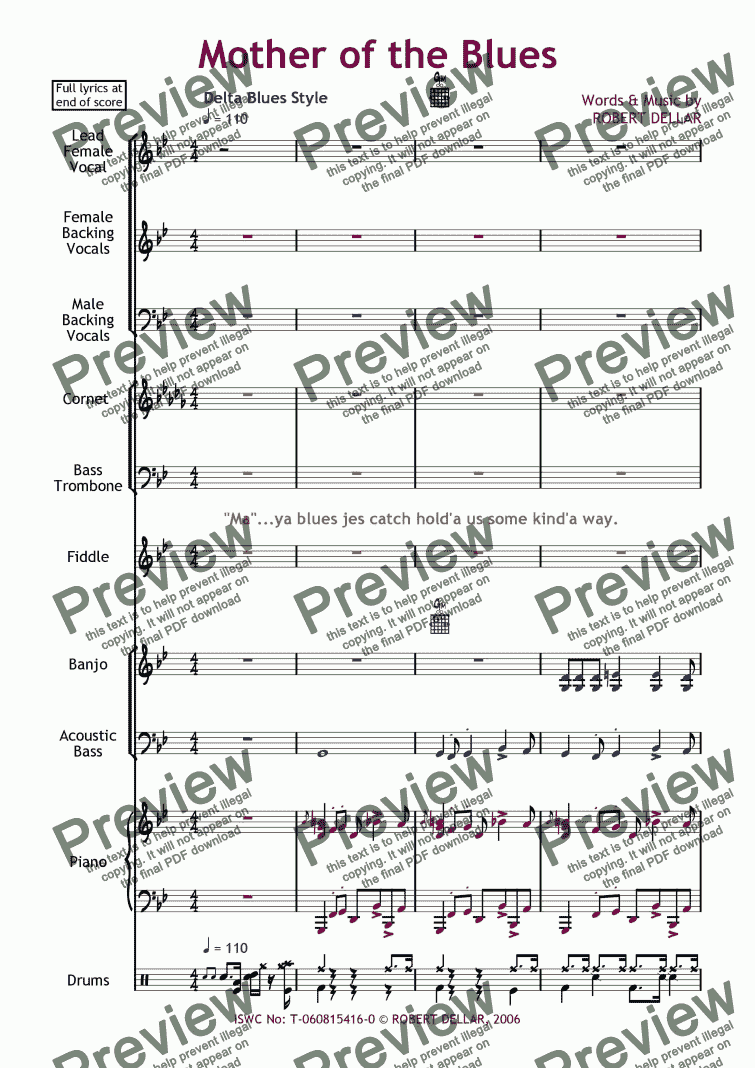 This song is dedicated to the memory of Gertrude Pridgett (1886-1939), best know by her stage name "Ma" Rainey; a.k.a. the 'Mother of the Blues'. Commencing circa 1923, in the early days of her recording life "Ma" Rainey performed with a band line-up similar to that scored here. The halcyon days of the pioneer female blues vocalists were in the 1920s & 1930s up until the depression. Too common in those days, and perhaps almost forgotten now, "Ma" and her contemporaries attracted lynching and other insidious threats to prevent them from being amongst the first black vocalists to make recorded music. In this context, it is impossible to overstate her legacy. Although lost to history of the failures of early sound recording technology, there is plenty to attest that "Ma" Rainey had a signature singing 'wail'. In this song, I denote my interpretation of her 'wail' as "Wmm" in the lyric. These 'wails' or 'moans' deserve performances with great depth of passion and feeling. "Ma" had a way of singing the blues that was legendary in her own time, as evidenced by poetry written in her honour (below). "Ma" went on to personally coach and encourage other performers in the art of blues singing, including Mammie Smith who sang in the first ever blues recording in 1920, and the legendary Bessie Smith ("Empress of the Blues"), reputed to be the best female blues singer of all time. Bessie Smith was her protege on tour in the early days. "Ma" Rainey was indeed the 'Mother of the Blues'.

'O Ma Rainey, L'il and low, Sing us 'bout de hard luck 'round our do'. Sing us 'bout de lonesome road we must go. I talked to a fellow an' the fellow say, "She jes' catch hold us some kind way…".

In order to submit this score to ScoreExchange.com Robert Dellar has declared that they own the copyright to this work in its entirety or that they have been granted permission from the copyright holder to use their work. If you believe that this score should be not available here because it infringes your or someone elses copyright, please report this score using the copyright abuse form.

Reviews of Mother of the Blues