By: Gottfried Finger
For: Duet of Soprano Recorders
This music is in your basket
View basket
Loading... 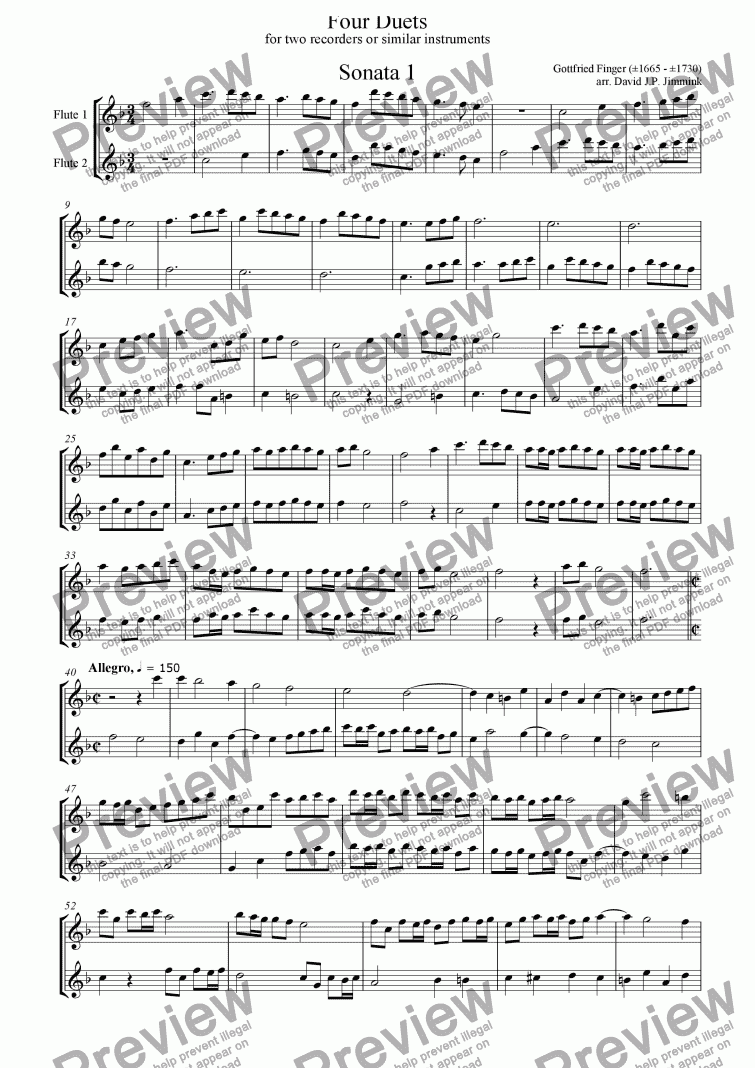 By: Gottfried Finger
For: Duet of Soprano Recorders

Composer
Gottfried Finger
Arranger
David Jimmink
Lyricist
none
Difficulty
Easy (Grades 1-3)
Duration
20 minutes
Genre
Classical music
License details
For anything not permitted by the above licence then you should contact the publisher first to obtain permission.

I suggest going to the third page immediately: Sonata 1 is not that not the best one of the four. I like sonatas 3 and 4 most; I performed sonata 3 several times with a friend.

I find it important that there are a lot of duets on sibeliusmusic.com. Playing together is more fun than alone and it is not often easy to gather three or more people on the same time. And: these sonatas are not diffucult, but very appealing.

Gottfried Finger (� 1665 - � 1730) was born in Olomouc in Moravia and worked there in the famous ensemble of the Prince-Bishop Karl Liechtenstein-Kastelcorno, in whose archive at Kromeriz Finger's earliest compositions are preserved. Finger was probably in Munich in 1682 and may have arrived London as early as 1685. Against stiff competition he received a post in James II's new Catholic chapel in 1687. In 1688 he published his op. 1, dedicated to James II, and intended for use in the Catholic chapel.

When James II went into exile in 1688, Finger remained in London and started a successful freelance career and became a central figure in London's musical life. He published several popular collections aimed at the growing amateur music market, including the first set of sonatas for solo instrument and continuo ever to be published in England (1690). He was especially successful as composer for the theatre, a part of his career that seems have begun in 1684, though his career in England came to an abrupt end when he entered the competition in 1701 to set Congereve?s masque The Judgement of Paris and came only fourth, beaten by John Weldon, John Eccles and Daniel Purcell. According to Roger North, ?having lost the cause?, Finger ?declared he was mistaken in his musick, for he thought he was to be judged by men, and not by boys, and thereupon left England and has not bin seen since?. Finger then returned to the Continent and held posts at several important cities, including Breslau (Wroclaw), Berlin, Heidelberg, Dusseldorf and Mannhiem ? at the latter he laid the foundations for Mannheim orchestra later made famous by Stamitz.

As a performer, Finger was a formidable bass viol virtuoso, and was also capable on a number of other instruments including the trumpet and lute. He also seems to have been among the early virtuosos on the baryton, a viol-like instrument with a set of strings behind the neck to be plucked by the thumb, an instrument for which Haydn later composed many pieces. He was heavily influenced by his Moravian and Bohemian contemporaries (Vejvanovsky and Biber in particular). Finger?s style may have sat strangely with English audiences at first, but he never discarded the central-European love for colourful instrumentation and musical inventiveness for which his native land is justly renowned.

Triosonata in C Major, Sonata in G, Sonata III in F for two treble recorders and Two plus two duets

Reviews of Four duets for recorder, violin or similar instruments

Sorry, there's no reviews of this score yet. Please .
In order to submit this score to ScoreExchange.com David Jimmink has declared that they own the copyright to this work in its entirety or that they have been granted permission from the copyright holder to use their work. If you believe that this score should be not available here because it infringes your or someone elses copyright, please report this score using the copyright abuse form.