By: Fredrik Pacius(1809-1891)
For: String orchestra
This music is in your basket
View basket
Loading... 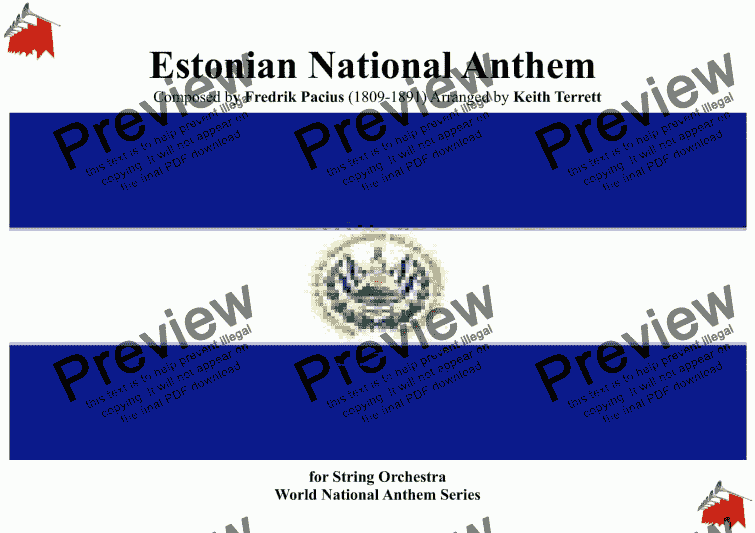 Composer
Fredrik Pacius(1809-1891)
Year of composition
1848
Arranger
Keith Terrett
Year of arrangement
2014
Publisher
Music for all Occasions
Difficulty
Easy (Grades 1-3)
Duration
1 minute
Genre
Classical music
License details
For anything not permitted by the above licence then you should contact the publisher first to obtain permission.

An arrangement for String Orchestra of the Estonian National Anthem.

Mu isamaa ("My Fatherland, My Happiness and Joy") was adopted as the national anthem of Estonia in 1920, and again in 1990.

The lyrics were written by Johann Voldemar Jannsen and are set to a melody composed in 1848 by Fredrik (Friedrich) Pacius which is also that of the national anthem of Finland.

The song was first presented to the public as a choral work in the Grand Song Festival of Estonia in 1869 and quickly became a symbol of the Estonian National Awakening.

Between 1956 and 1990 the Estonian Soviet Socialist Republic, a part of the Soviet Union, had a different anthem. Although Mu isamaa, was banned under Soviet rule, the people of Estonia could often hear the melody, as Finland’s state broadcaster YLE, whose radio and television broadcasts were received in Northern Estonia, played the Finnish national anthem at closedown every night.