A Serenade for Bassoon & Keyboard

By: Franz Schubert
For: Solo Bassoon + piano
This music is in your basket
View basket
Loading... 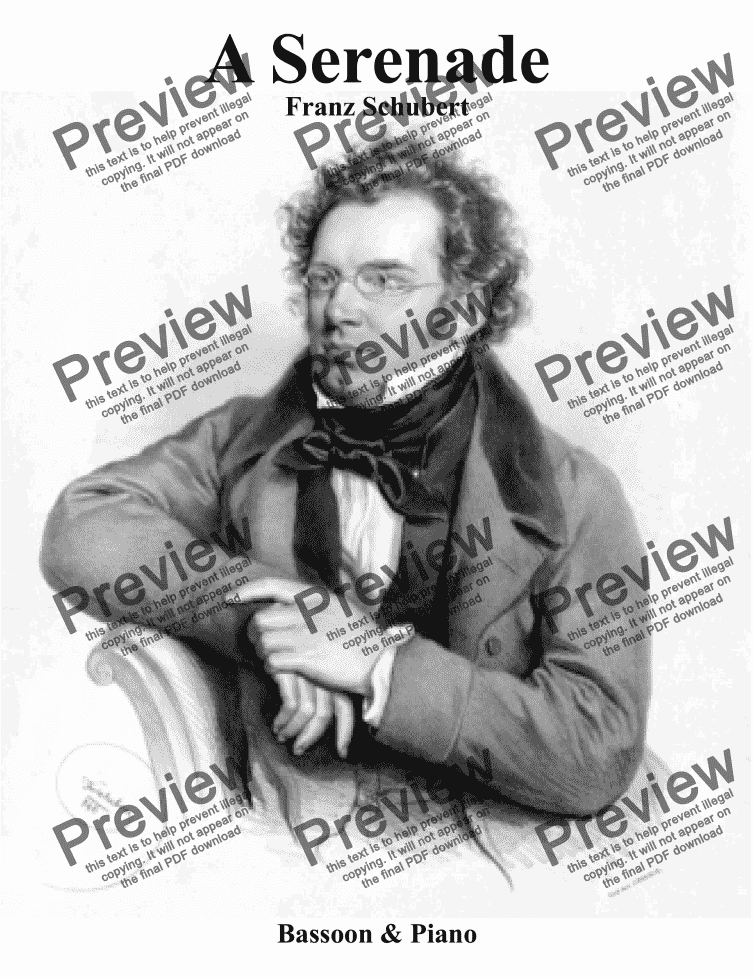 A Serenade for Bassoon & Keyboard

Composer
Franz Schubert
Year of composition
1826
Arranger
Keith Terrett
Year of arrangement
2007
Publisher
Music for all Occasions
Difficulty
Moderate (Grades 4-6)
Duration
3 minutes
Genre
Classical music
License details
For anything not permitted by the above licence then you should contact the publisher first to obtain permission.

An arrangement for Bassoon and Keyboard, of Schubert’s Serenade, number 4 from his Schwanengesang, D. 957, is one of his best-loved songs. The Swan Song collects Schubert’s last songs from 1828. The first seven set poems by Ludwig Rellstab.

Named by its first publisher, Tobias Haslinger, who presumably wished to present it as Schubert's last testament, Schwanengesang differs from the earlier Die schöne Müllerin and Winterreise song-cycles by including settings of more than one poet. Seven texts by Ludwig Rellstab (1799–1860) are followed by six by Heinrich Heine (1797–1856); inclusion of the last song, to words by Johann Gabriel Seidl (1804–1875), may or may not reflect Schubert's wishes. In any case, all 14 songs were composed in 1828 and the collection was published in 1829, a few months after the composer's death.

Franz Lizst ater transcribed the entire set for solo piano. While staying faithful to Schubert's original, he often changes the piano texture as a way of providing a personal commentary on the text and music.

The Rellstab and Heine settings were copied in a single sitting on consecutive pages of the manuscript in Schubert's hand, and Seidl's Die Taubenpost is considered to be Schubert's last Lied — thus the basis for Haslinger's sequence, one accepted by posterity together with his conceit that a cycle exists at all. (The true cycles Die schöne Müllerin and Die Winterreise had sold well, motivating the publisher.) The title Schwanengesang is not of course the composer's but all the song titles are; Heine, for one, did not name his poems.

On 2 October 1828, after the manuscript had been written, Schubert offered the Heine set of six songs to a Leipzig publisher by the name of Probst. We can assume, then, that Schubert, at least in the beginning, intended two separate single-poet collections. Furthermore the order of Nos. 8–13, as they appear in the manuscript, differs from that of the poems as Heine published them: 10, 12, 11, 13, 9, 8, which in any case were not consecutive, as the table below shows. It was customary for Schubert to respect the poet's sequence; the manuscript may not represent Schubert's desired order. The Seidl song, "Die Taubenpost", has no connection to the rest of the cycle and was appended by Haslinger at the end to round up all of Schubert's last compositions.

Reviews of A Serenade for Bassoon & Keyboard