TCHAIKOVSKY Concerto for Violin and orchestra; transcribed for Alto Saxophone and Piano 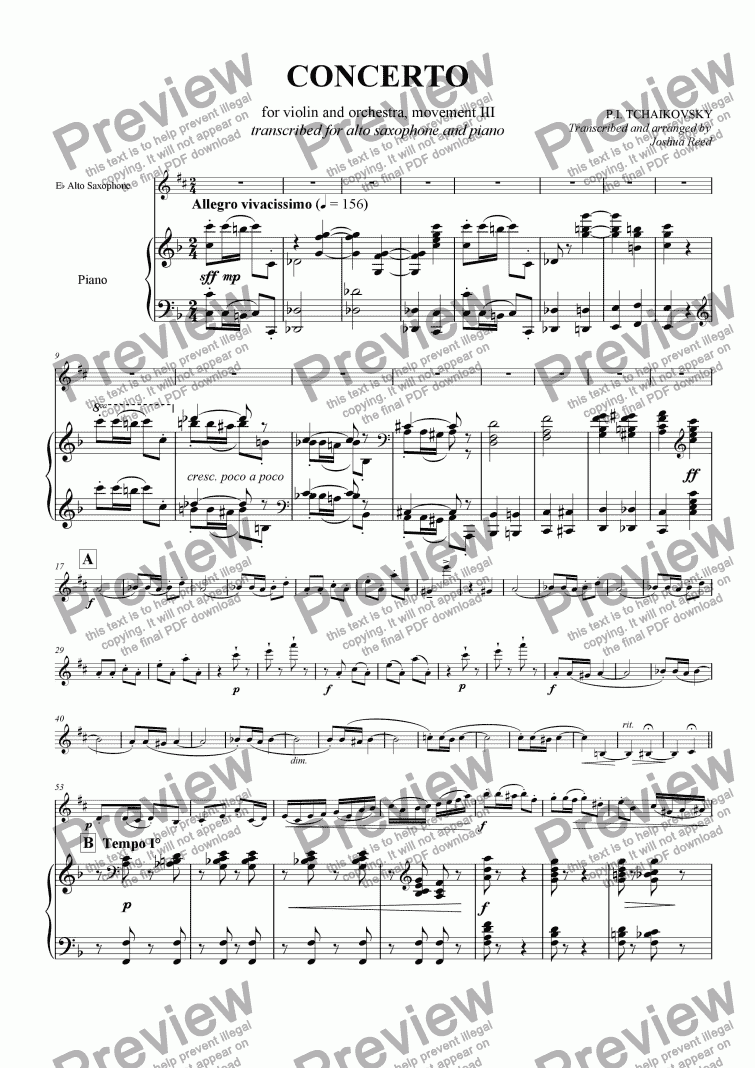 Tchaikovsky's Violin Concerto in D Major was composed in less than a month during March and April 1878; however, its premier performance didn't occur until 1881 because the violinist whom Tchaikovsky intended to dedicate the piece–Leopold Auer–refused to perform it, citing technical issues (by that we mean the piece was too hard and he couldn't hack it). Instead it was premiered Adolf Brodsky, a relatively unknown Austrian violinist, who received the work by chance. This concerto is considered one of the pinnacles of the violin repertoire and it really is one of the masterworks of the romantic era.

Here it is transcribed into F major so that the saxophonist can play a part that reads mostly like the violin part, as it lays fairly easily on the fingers. It is edited, of course, to maintain practicality in the ranges of the instrument and practicality of articulation. (Double tonguing is possible on the saxophone, but really the original articulation wouldn't be feasible after about three minutes of the piece.) Other than that, it's a direct transcription.

To any saxophonist wishing to undertake this monster–just drop me an e-mail and for the cost of postage I'll send you a bound piano score and saxophone part.

In order to submit this score to ScoreExchange.com Joshua Reed has declared that they own the copyright to this work in its entirety or that they have been granted permission from the copyright holder to use their work. If you believe that this score should be not available here because it infringes your or someone elses copyright, please report this score using the copyright abuse form.

Reviews of TCHAIKOVSKY Concerto for Violin and orchestra; transcribed for Alto Saxophone and Piano