Sign in / Register
HomeInstrumentationsSolo instrument + pianoJazz it Up: When the Saint's Go Marching In for C Trombone/Euphonium/Baritone & Piano

Jazz it Up: When the Saint's Go Marching In for C Trombone/Euphonium/Baritone & Piano

By: Traditional Arranged by Keith Terrett
For: Solo Tenor Trombone + piano
This music is in your basket
View basket
Loading... 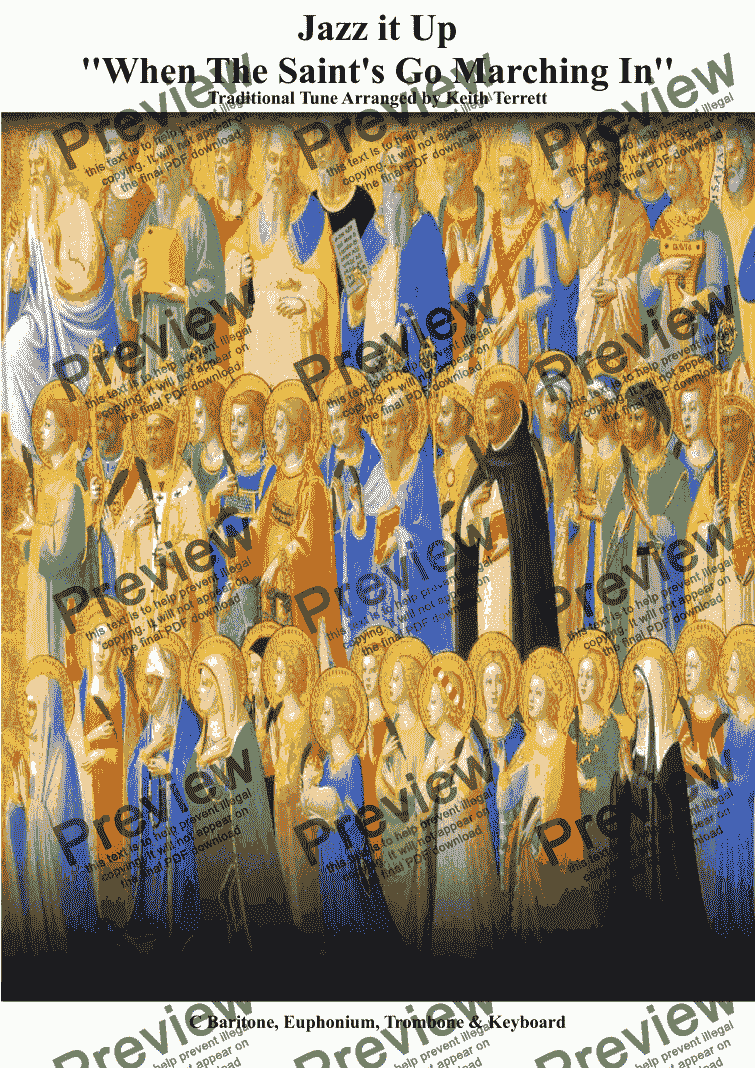 Jazz it Up: When the Saint's Go Marching In for C Trombone/Euphonium/Baritone & Piano

Composer
Traditional Arranged by Keith Terrett
Arranger
Keith Terrett
Year of arrangement
2014
Publisher
Music for all Occasions
Difficulty
Moderate (Grades 4-6)
Duration
1 minute
Genre
Jazz music
License details
For anything not permitted by the above licence then you should contact the publisher first to obtain permission.

My arrangement of ''When the Saint's'' for younger or older/beginner players, wishing to play a little jazz!

Solo parts are in C to suit all low brass.

The origins of this song are unclear. It apparently evolved in the early 1900s from a number of similarly titled gospel songs, including "When the Saints Are Marching In" (1896) and "When the Saints March In for Crowning" (1908). The first known recorded version was in 1923 by the Paramount Jubilee Singers on Paramount 12073. Although the title given on the label is "When All the Saints Come Marching In", the group sings the modern lyrics beginning with "When the saints go marching in". No author is shown on the label. Several other gospel versions were recorded in the 1920s, with slightly varying titles but using the same lyrics, including versions by The Four Harmony Kings (1924), Elkins-Payne Jubilee Singers (1924), Wheat Street Female Quartet (1925), Bo Weavil Jackson (1926), Deaconess Alexander (1926), Rev. E. D. Campbell (1927), Robert Hicks (AKA Barbecue Bob, 1927), Blind Willie Davis (1928), and the Pace Jubilee Singers (1928).

The earliest versions were slow and stately, but as time passed the recordings became more rhythmic, including a distinctly uptempo version by the Sanctified Singers on British Parlophone in 1931. Even though the song had folk roots, a number of composers claimed copyright in it in later years, including Luther G. Presley and Virgil Oliver Stamps, R. E. Winsett, The tune is particularly associated with the city of New Orleans. A jazz standard, it has been recorded by a great many jazz and pop artists.

There are many more versions in my store for all instruments.

Reviews of Jazz it Up: When the Saint's Go Marching In for C Trombone/Euphonium/Baritone & Piano