By: Bach
For: String orchestra
This music is in your basket
View basket
Loading... 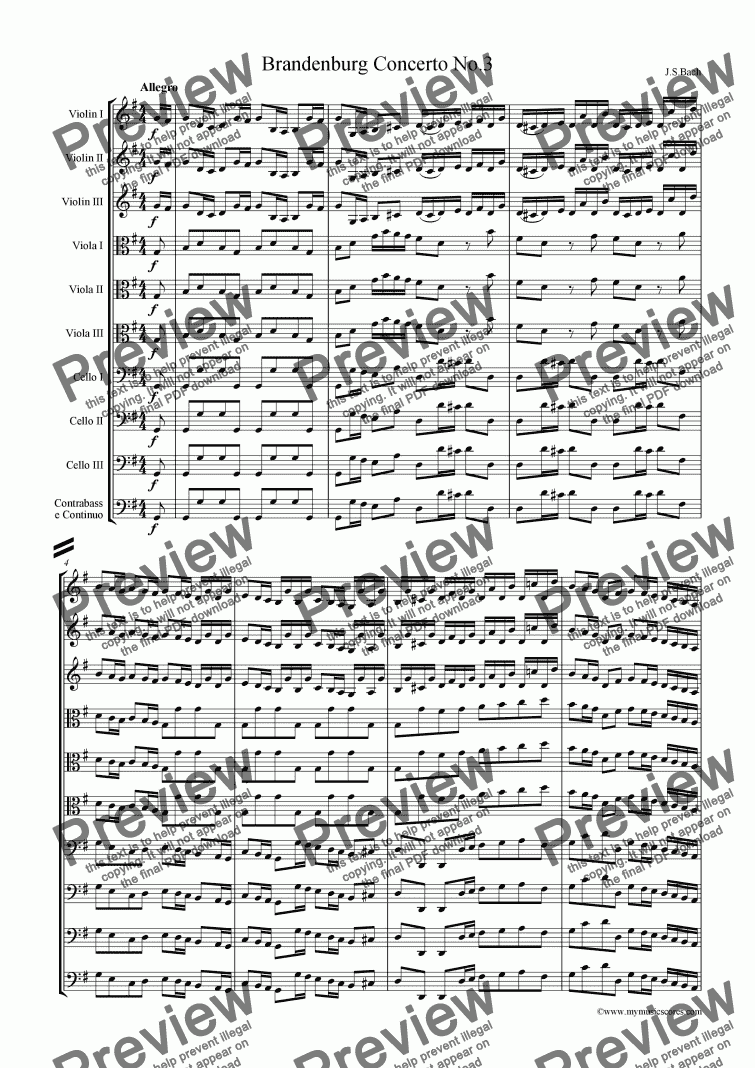 By: Bach
For: String orchestra

Composer
Bach
Year of composition
1700
Lyricist
Paul Wood
Publisher
Mymusicscores.com
Difficulty
Moderate (Grades 4-6)
Duration
10 minutes
Genre
Classical music
License details
For anything not permitted by the above licence then you should contact the publisher first to obtain permission.

Though it is possible to ascertain a latest date of composition for the Brandenburg Concertos because of the inscription of 24 March 1721 on the dedication manuscript to the Margrave, most likely they had been written over a number of years during Bach's tenure as Kapellmeister at Anhalt-K�then and possibly even extending back to the period of his employment at Weimar (1708-17).

The second movement consists of a single measure with the two chords that make up a Phrygian mode cadence and�although there is no direct evidence to support it�it was likely that these chords are meant to surround or follow a cadenza improvised by a harpsichord or violin player.

Occasionally, the third movement from Bach's "Sonata for Violin and Continuo in G , BWV. 1021" (marked Largo) is substituted for the second movement as it contains an identical Phrygian mode cadence as the closing chords. The Adagio from the Violin Sonata in G, BWV 1019a, has also been used.

The outer movements use the ritornello form found in many instrumental and vocal works of the time. The first movement can also be found in reworked form as the sinfonia of the cantata BWV 174, "Ich liebe den H�chsten von ganzem Gem�te", with the addition of three oboes and two horns.

Reviews of Brandenburg Concerto No.3

Sorry, there's no reviews of this score yet. Please .
In order to submit this score to ScoreExchange.com Paul Wood has declared that they own the copyright to this work in its entirety or that they have been granted permission from the copyright holder to use their work. If you believe that this score should be not available here because it infringes your or someone elses copyright, please report this score using the copyright abuse form.