Sign in / Register
HomeInstrumentationsSolo instrument + pianoAir on the G String, from the Suite No. 3 in D for Bb Trumpet/Cornet & Keyboard

Air on the G String, from the Suite No. 3 in D for Bb Trumpet/Cornet & Keyboard 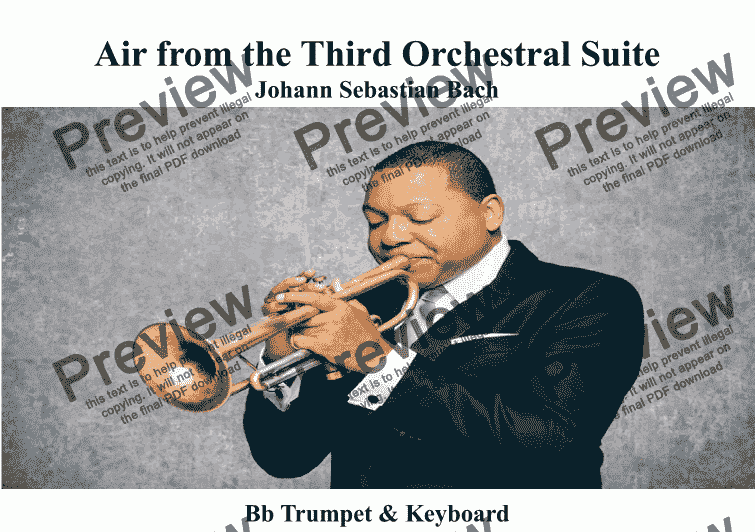 Air on the G String, from the Suite No. 3 in D for Bb Trumpet/Cornet & Keyboard

Composer
Johann Sebastian Bach (1685 - 1750)
Year of composition
1717
Arranger
Keith Terrett
Year of arrangement
2014
Publisher
Music for all Occasions
Difficulty
Moderate (Grades 4-6)
Duration
4 minutes
Genre
Classical music
License details
For anything not permitted by the above licence then you should contact the publisher first to obtain permission.

An arrangement of Bach’s Air on the G String, for Cornet, Trumpet or Flugelhorn with Piano accompaniment; re-named Air on the Second Valve!

This is a nice chart for a concert, gig or recital; or just purchase it to expand your slow ballad repertoire!

The "Air on the G String" is an adaptation by August Wilhelmj of Johann Sebastian Bach’s "Air". The air is usually played slowly and freely, and features an intertwining harmony and melody.

The original piece is part of Bach’s Orchestral Suite No. 3 in D major, BWV 1068, written for his patron Prince Leopold of Anhalt sometime between the years 1717 and 1723.

Reviews of Air on the G String, from the Suite No. 3 in D for Bb Trumpet/Cornet & Keyboard

Keyboards and Trumpet in B^b

Keyboards and Trumpet in B^b