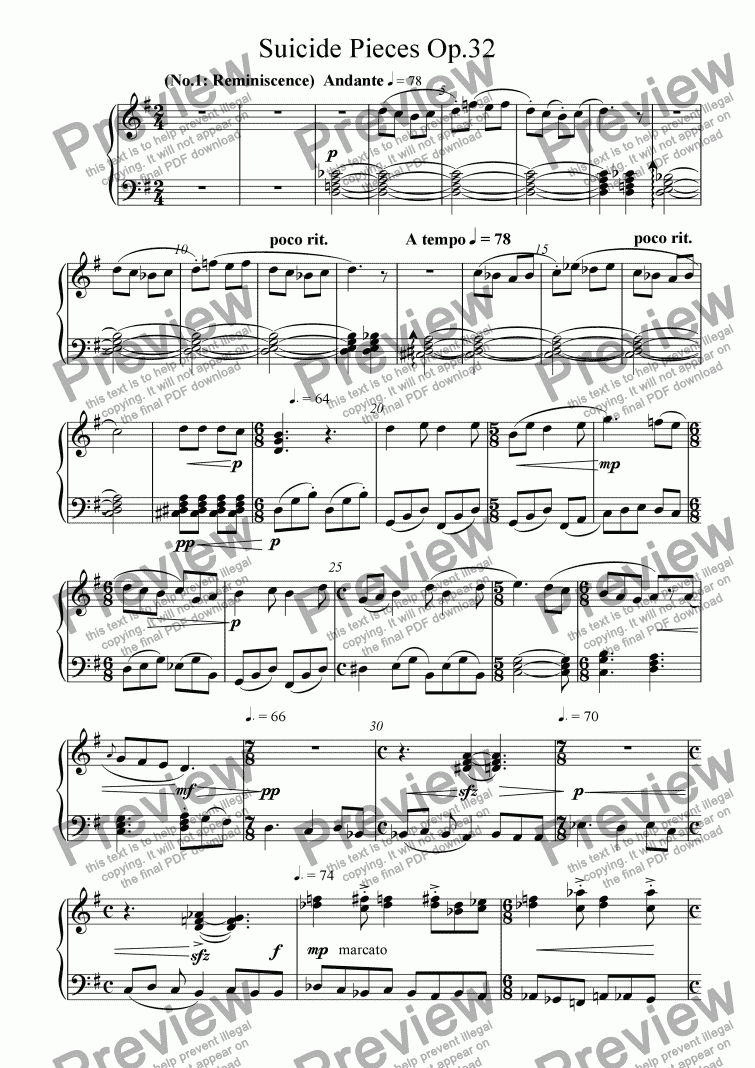 These disjointed piano pieces were written a few months before the composer's suicide attempt back in 1998, and give the listener a fair indication of his mental and emotional state at the time. Much of the material was rescued from a symphony in G minor, aborted after the death of the composer's mother through gross hospital negligence at Princess Alexandra Hospital in Brisbane in 1994. The first piece, 'Reminiscence' begins with a lacerated introduction, leading to an awkward G major idea. The memories quickly turn sour in a harsh repeated-chord climax. The central section in E flat retreats into childhood escapism: here the theme from the cartoon 'Kimba the White Lion' (a childhood favourite) is given in full before the opening section returns. This now quickly loses impetus and winds down with another backward glance at childhood before a serene close. The second piece, 'Bitterness' is a brutal picture of self-disgust, the composer's name (with the notes F-Re-D) hammered out mercilessly in the left hand. The effect is very unnerving. The third piece, 'Love' (unrequited, naturally) provides respite after the previous outburst, its D flat melody used again in the B flat minor Symphony (No.2) of 2005. The central section provides the usual contrast before the return, this time underlined with clumsy triplet figures. Reveries are nice, but reality isn't. Following on from this, the fourth piece, 'Emptiness' wanders wearily and aimlessly. Fragments of other music float by from time to time, and the piece ends with open, empty fifths. As for the final piece 'Epilogue', the meaning should be clear enough: two dissonant chords and it's all over…

In order to submit this score to ScoreExchange.com Fred Edwards has declared that they own the copyright to this work in its entirety or that they have been granted permission from the copyright holder to use their work. If you believe that this score should be not available here because it infringes your or someone elses copyright, please report this score using the copyright abuse form.