By: Wayne I. L. Davies
For: Choir
This music is in your basket
View basket
Loading... 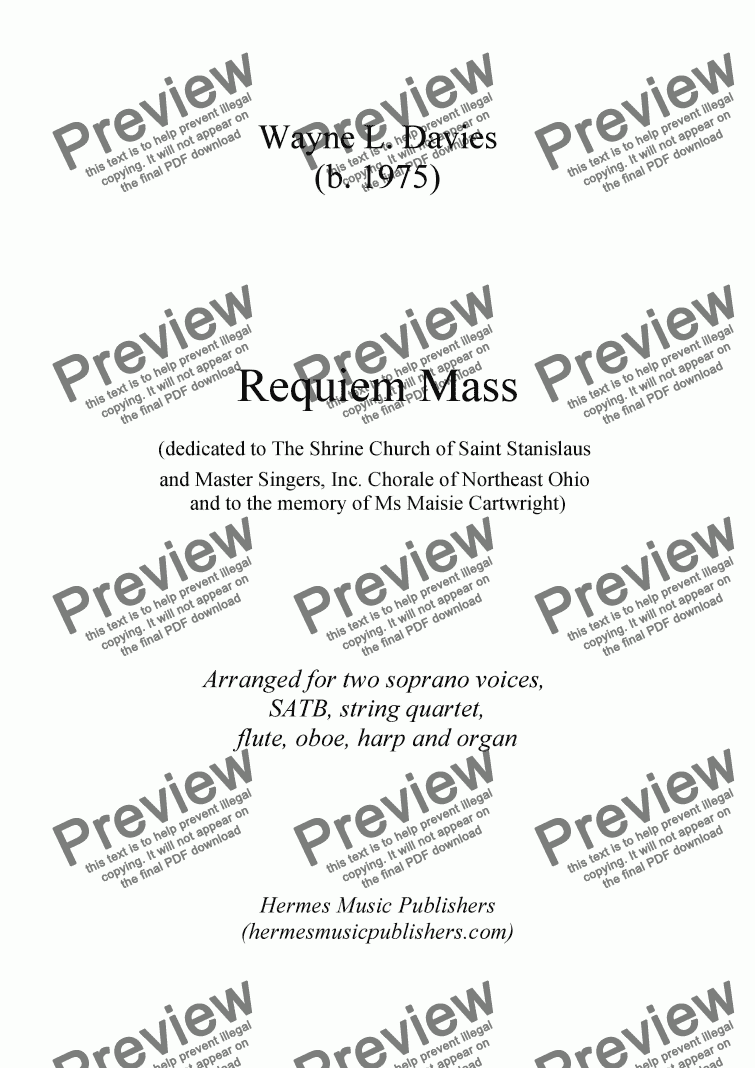 Composer
Wayne I. L. Davies
Year of composition
1993
Lyricist
anon.
Publisher
Hermes Music Publishers
Difficulty
Difficult (Grades 7+)
Duration
40 minutes
Genre
Modern classical music
License details
For anything not permitted by the above licence then you should contact the publisher first to obtain permission.

�Requiem Mass� is a large choral work composed by Wayne L. Davies and consists of eight movements (Requiem Aeternam, Kyrie Eleison, Recordare, Lacrymosa, Sanctus and Benedictus, Agnus Dei, Pie Jesu, and In Paradisum), which are linked to form a single, continuous piece of music. Arranged in this form for two solo soprano (or solo soprano and solo alto) voices, SATB, string quartet (or string orchestra), flute, oboe, harp and organ, this piece of music will be performed by the Master Singers, Inc. Chorale of Northeast Ohio at a memorial concert for the late Pope John Paul II to be given at the Shrine Church of Saint Stanislaus, Ohio on 6th April 2008.

The �Requiem Mass� was written between 1993-1995 and formed part of the composer�s A Level Music portfolio. Akin to Faure�s �Requiem Mass�, the Davies �Requiem� dispenses with the �Dies Irae� and includes the �In Paradisum�, ending a C minor work in C major to symbolise the evolution of thought from despair of the passing away of a loved one to finally acceptance and a celebration of their life. This work is dedicated to the memory of Ms Maisie Cartwright.

This is the vocal score to accompany the 'Requiem Mass'.

Sorry, there's no reviews of this score yet. Please .
In order to submit this score to ScoreExchange.com Wayne I. L. Davies has declared that they own the copyright to this work in its entirety or that they have been granted permission from the copyright holder to use their work. If you believe that this score should be not available here because it infringes your or someone elses copyright, please report this score using the copyright abuse form.