By: John Stafford Smith
For: String orchestra
This music is in your basket
View basket
Loading... 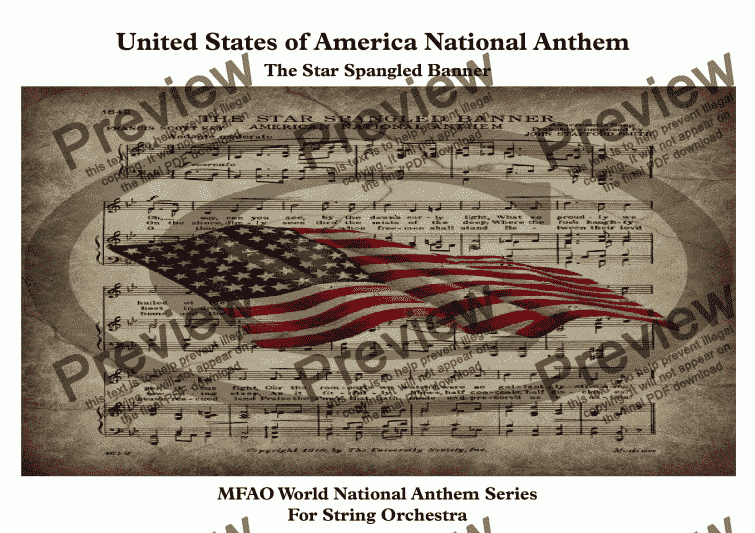 Composer
John Stafford Smith
Year of composition
1773
Arranger
Keith Terrett
Year of arrangement
2008
Lyricist
Francis Scott Key
Publisher
Music for all Occasions
Difficulty
Easy (Grades 1-3)
Duration
1 minute
Genre
World music
License details
For anything not permitted by the above licence then you should contact the publisher first to obtain permission.

An arrangement for String Orchestra in the key of D, of the USA National Anthem.

The Star-Spangled Banner" is the national anthem of the United States of America. The lyrics come from "Defence of Fort McHenry", a poem written in 1814 by the 35-year-old lawyer and amateur poet, Francis Scott Key, after witnessing the bombardment of Fort McHenry by the British Royal Navy ships in Chesapeake Bay during the Battle of Fort McHenry in the War of 1812.

The poem was set to the tune of a popular British song written by John Stafford Smith for the Anacreontic Society, a men’s social club in London. "The Anacreontic Song" (or "To Anacreon in Heaven"), with various lyrics, was already popular in the United States. Set to Key’s poem and renamed "The Star-Spangled Banner", it would soon become a well-known American patriotic song. With a range of one and a half octaves, it is known for being difficult to sing. Although the song has four stanzas, only the first is commonly sung today, with the fourth ("O! thus be it ever when free men shall stand…") added on more formal occasions.[citation needed] The fourth stanza includes the line "And this be our motto: In God is our Trust." The United States adopted "In God We Trust" as its national motto in 1956.

Before 1931, other songs served as the hymns of American officialdom. "Hail, Columbia" served this purpose at official functions for most of the 19th century. "My Country, ’Tis of Thee", whose melody is identical to the British national anthem, also served as a de facto anthem before the adoption of "The Star-Spangled Banner." Following the War of 1812 and subsequent American wars, other songs would emerge to compete for popularity at public events, among them "The Star-Spangled Banner."

Have you heard my Elegy Sentimentale for Orchestra:http://www.youtube.com/watch?v=K0CLKDQuOK4