By: Darin Templeton
For: String quartet
This music is in your basket
View basket
Loading... 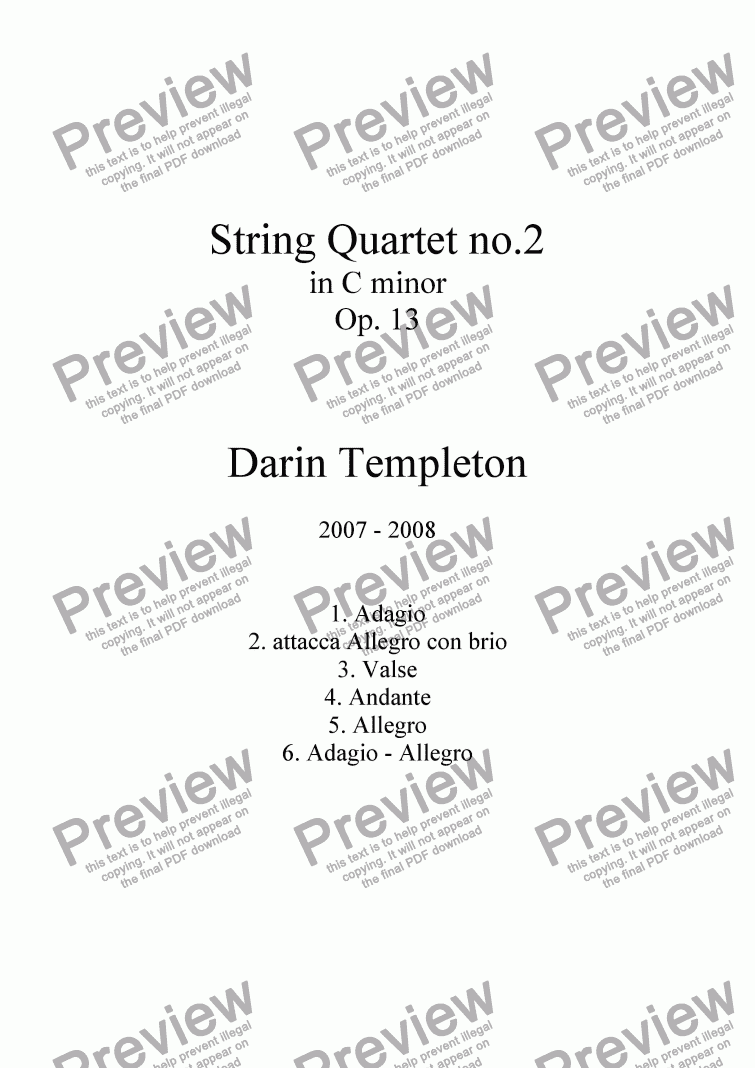 By: Darin Templeton
For: String quartet

Composer
Darin Templeton
Year of composition
2008
Lyricist
none
Difficulty
Difficult (Grades 7+)
Duration
9 minutes
Genre
Modern classical music
License details
For anything not permitted by the above licence then you should contact the publisher first to obtain permission.

Movement 1 � Adagio This freeform introduction is punctuated by the opening unison statement; a small cell of notes, which forms a motif. This motif appears under guise in other movements throughout the piece. The harmonies are moody and sometimes dissonant. Unison and chordal sections contrast with counterpoint, including a fugal middle section. This movement leads directly into the following Allegro without pause.

Movement 2 � attacca Allegro con brio The centerpiece of the work, this movement brings dark, moving shadows of the prelude into focus. The identity of the movement is the melodic motif which is introduced by the viola, imitated by the cello, and reappearing under different variations throughout. There are also identifiable rhythmic motifs that will reappear throughout this movement as well as those to follow. The form is binary (sonata allegro) and is monothematic. The development section travels through the most distant keys of any of the movements, and this is largely done, not only to build tension, but to maximize the different tonal color therein, as instruments resonate quite differently in different keys. I see the home key of c minor as a dark, broiling, hellish key, and attempt to contrast it by exploiting the lighter color of Gb major, which to me, floats like a cloud. The movement is dominated by elements of tension, struggle, vain moments of heroism and the hopeless adoration of beauty which is fleeting. In the end, tragedy is inevitable and emptiness prevails.

For parts- see the complete score.

To see video of a performance of this work, check out: http://youtube.com/watch?v=_t_UmOxkLYI&feature=related

Sorry, there's no reviews of this score yet. Please .
In order to submit this score to ScoreExchange.com Darin Templeton has declared that they own the copyright to this work in its entirety or that they have been granted permission from the copyright holder to use their work. If you believe that this score should be not available here because it infringes your or someone elses copyright, please report this score using the copyright abuse form.