By: Harry Sdraulig
For: Piano trio
This music is in your basket
View basket
Loading... 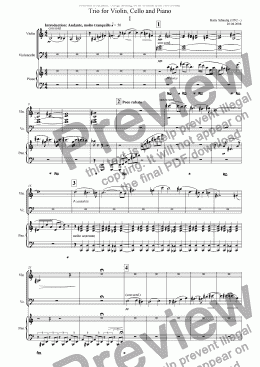 By: Harry Sdraulig
For: Piano trio

Composer
Harry Sdraulig
Publisher
Balwyn High School
Difficulty
Difficult (Grades 7+)
Duration
3 minutes
Genre
Modern classical music
License details
For anything not permitted by the above licence then you should contact the publisher first to obtain permission.

This work was completed in August 2008 and is my first abstract chamber work, with no programmatic context, divided into two closely related yet highly contrasting movements. There are two salient musical elements that form the basis of the entire work, both of which are introduced early on in the opening movement: the first, a mysterious chord built up entirely of perfect fourths and tritones in the pattern C, F, B, E, A#, D#, A etc. The second idea is a four-note shape that opens the work: a step up from a central note, then a larger step down and then another step down further and its inversion and retrograde. All the material of the work, both harmonic and thematic, evolves from either two of these ideas, although they are often used in combination.

The first movement acts as a brief, calm and sparse introduction. It opens with a muted violin melody, which is then joined by muted cello as the piano introduces a variant of the main theme. The second subject of the next movement is then foreshadowed and then the opening is recapitulated, the harmonies now a fifth lower, although the piano enters with the same melody in the same key as it did earlier, creating tonal ambiguity.

The austere second movement forms the main substance of the piece. Marked Allegro concentrato, its contrapuntal textures are thick and they become more and more severe as the work progresses. It is very uncompromising and strict in its handling of material, and harsh dissonances pervade the harmonic palette as the salient intervals - perfect fourths and tritones - continually clash. Considerable tension is reached until the violence ceases and a passage of calm emerges, although not without temporary intrusions by the piano. Here both subjects of the movement are combined in multiple augmentation. The opening is recapitulated before the work is crowned with a brief and resolute coda.