By: Vincas Kudirka
For: Brass quintet
This music is in your basket
View basket
Loading... 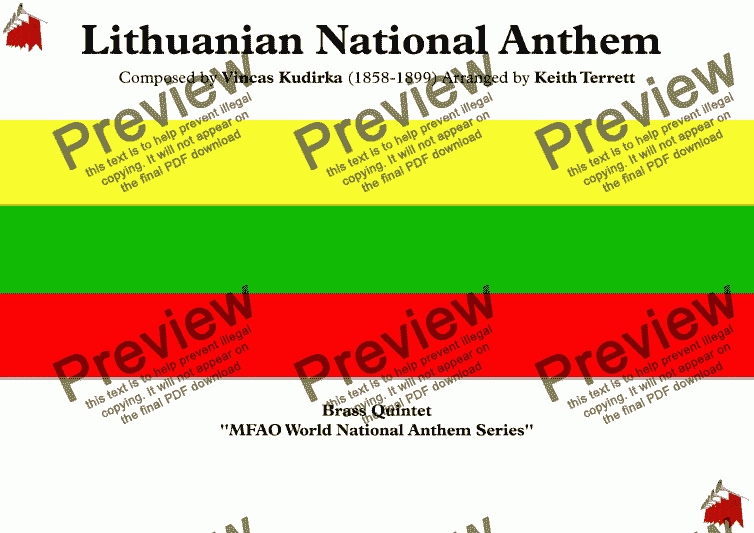 By: Vincas Kudirka
For: Brass quintet

Composer
Vincas Kudirka
Year of composition
1898
Arranger
Keith Terrett
Year of arrangement
2014
Publisher
Music for all Occasions
Difficulty
Easy (Grades 1-3)
Duration
1 minute
Genre
Classical music
License details
For anything not permitted by the above licence then you should contact the publisher first to obtain permission.

The National Anthem of Lithuania, arranged for Brass Quintet. There are versions for string orchestra & full orchestra in my stores.

Tautiška giesmė (The National Hymn) is the national anthem of Lithuania, also known by its opening words "Lietuva, Tėvyne mūsų" (official translation of the lyrics: "Lithuania, Our Homeland", literally: "Lithuania, Our Fatherland") and as "Lietuvos himnas" (Hymn of Lithuania). The music and lyrics were written in 1898 by Vincas Kudirka, when Lithuania was still part of the Russian Empire. The fifty-word poem was a condensation of Kudirka’s conceptions of the Lithuanian state, the Lithuanian people, and their past. Shortly before his death in 1899, the anthem was performed for Lithuanians living in Saint Petersburg, Russia. The first public Lithuanian performance of the anthem took place in Vilnius in 1905, and it became the official national anthem in 1919, a year after Lithuania declared its independence. Following the occupation and annexation of Lithuania by the Soviet Union in 1940, the anthem was forbidden to be played or sung in public. "Tautiška giesmė" was reinstated in 1989 shortly before the reestablishment of Lithuanian independence and confirmed in the National Anthem act (21 October 1991.) It was automatically included as the national anthem in 1992, when the new Constitution was ratified after independence from the Soviet Union was achieved. The status of "Tautiška giesmė" as the National Anthem of Lithuania was further confirmed in 1999 with the passage of a national law stating that.

You can also purchase the complete set of Baltic State National Anthems from my store.

Poet Vincas Kudirka, also a Lithuanian patriot, wrote a 50-word poem on his views of the Lithuanian nation while it was still part of Czarist Russia. Written in 1898, he also wrote the music after the poem was written shortly before his death the following year.

The song was first performed shortly before his death for a group of Lithuanians in St. Petersburg and was first performed in Lithuania itself in 1905 and was declared as the national anthem upon declaration of independence from Russia in 1918 and remained so until Lithuania was annexed by the Soviet Union in 1940.