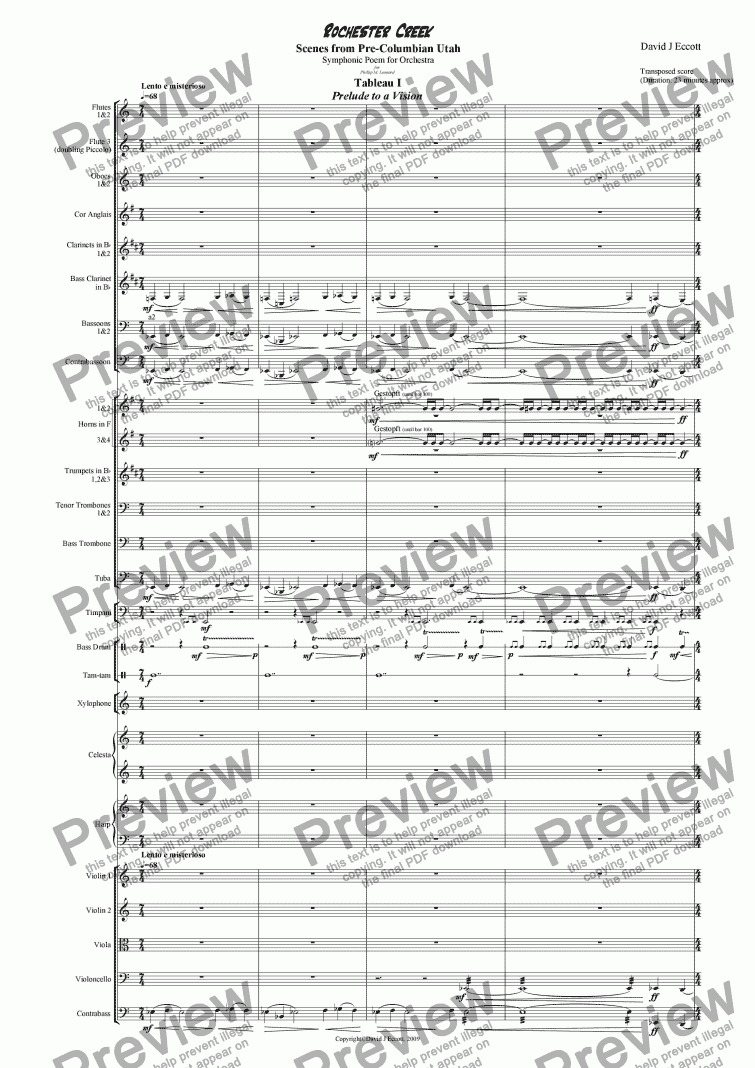 The Rochester Creek petroglyph site is located in an isolated region of central Utah in the United States, on a promontory overlooking the confluence of the Rochester and Muddy Creeks within an area once inhabited by a people known today as the Fremont. The petroglyphs (500-700 AD) contain certain elements that are not well accounted for simply as Amerindian rock art. One particular piece of research,* for which there is both cultural and genetic support, suggests that some form of Egyptian impact appears to be present in the glyphs. If the characters on the Rochester Creek panel are viewed as a result of an intrusion by a pre-Columbian Mediterranean culture with iconography similar to that of ancient Egypt, it is possible to obtain a homogeneous, coherent reading. The composer has utilized this hypothesis in his musical interpretation. The composition is divided into a connected series of ten tableaux representing the setting and the main individual petroglyphs. They are as follows:

Tableau I - Prelude to a Vision. Tableau II - Nightfall. Tableau III - The Petroglyph Panel. Tableau IV - Cobra. The serpent that pulls the solar barque carrying souls of the deceased to the underworld Tableau V - Nut and Geb give birth to the sun Tableau VI - Scarab. The beetle that rolls the dung. - The god that rolls the sun Tableau VII - The Death Glyph. EMMET Tableau VIII - The "Ka" (Soul) and the journey on the Solar Barque across the arch of Heaven to the Nether World Tableau IX - The Scene of Ferocity. The Soul on the rope ladder is attacked by the Devourer of the Unjust) Tableau X - Pole Star: The Night Sun and the Night-time Manifestation of Horus. Eternity and eternal circling

The first tableau is of a general descriptive nature in which the ambience, mood and desolation of the site are conveyed. As night falls in tableau II the anthropomorphic and zoomorphic characters on the panel prepare to enact their various roles. Tableau III expresses both the majesty and mystique of the panel itself. With "Cobra" in tableau IV, the first of the set of individual petroglyphs is introduced. It is followed by "Nut and Geb" and "Scarab". All three petroglyphs have direct associations to ancient Egyptian iconography relating to the sky or the night-time journey of the soul. The agitated music of tableau VII communicates the distressed state of the two figures shown on the "Death Glyph" where an owl and an ovate mass also seem to represent the Egyptian hieroglyphic spelling M - T; (emmet, meaning death). On one of the petroglyphs there appears a head framed by a pair of upraised arms that bears a correspondence to the Egyptian hieroglyphic representation for "Ka" (the soul). Thus, in Tableau VIII the reflective, ethereal nature of the soul and its journey on the celestial barque to the Nether World is illustrated. The perils that the soul encounters during its journey when it is attacked by the "Devourer of the Unjust" who, according to Egyptian mythology, was a half-crocodile and half-hippopotamus creature, are depicted in the "Scene of Ferocity". On another panel adjacent to the main panel, the contents of which appear to be a continuation of the theme of the night sky, an encircled figure compares precisely to that of an Egyptian iconographic pictogram and the concept of eternity and eternal circling. It is therefore a symbol for the "Pole Star" or night sun and the night-time manifestation of Horus: An atmosphere of serenity and perpetual revolving pervades the final tableau. The work is to be played continuously without pauses between the tableaux.

In order to submit this score to ScoreExchange.com David Eccott has declared that they own the copyright to this work in its entirety or that they have been granted permission from the copyright holder to use their work. If you believe that this score should be not available here because it infringes your or someone elses copyright, please report this score using the copyright abuse form.