By: Sayed Darwish
For: Brass quintet
This music is in your basket
View basket
Loading... 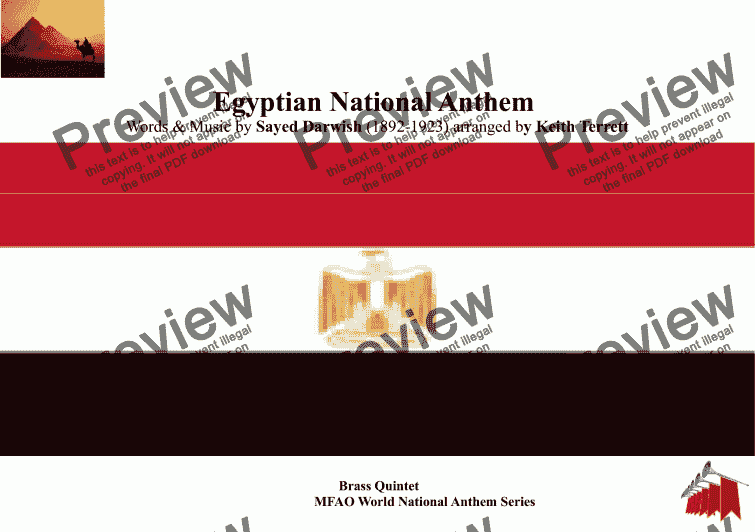 By: Sayed Darwish
For: Brass quintet

Composer
Sayed Darwish
Arranger
Keith Terrett
Publisher
Music for all Occasions
Difficulty
Moderate (Grades 4-6)
Duration
1 minute
Genre
Classical music
License details
For anything not permitted by the above licence then you should contact the publisher first to obtain permission.

The lyrics were written by Sayed Darwish who also composed the music and maintained close ties with early leaders of the national movement for independence in Egypt, such as Mustafa Kamel. In fact, the chorus of Egypt’s national anthem were derived from one of Kamel’s most famous speeches.

Egypt’s first national anthem dated back to 1869 when a royal anthem was composed to honour the monarch. It is unclear how long this anthem was in use. Although the monarchy was deposed in 1952, the anthem was used as part of the anthem of the United Arab Republic with Syria in 1958.

"Walla Zaman Ya Selahy" was first written for Umm Kulthum, who was considered by many as the most popular female singer of that period. The song gained a great deal of popularity in 1956, and was adopted as the national anthem in 1960. It remained as Egypt’s national anthem until 1979, when it was replaced by the current national anthem. The 1960-1979 anthem was also used, without lyrics, from 1965-1981 by Iraq, which was seeking a greater Arab state that would link those two nations with other Arab states.