By: Osman Zeki Ungör
For: Brass quintet
This music is in your basket
View basket
Loading... 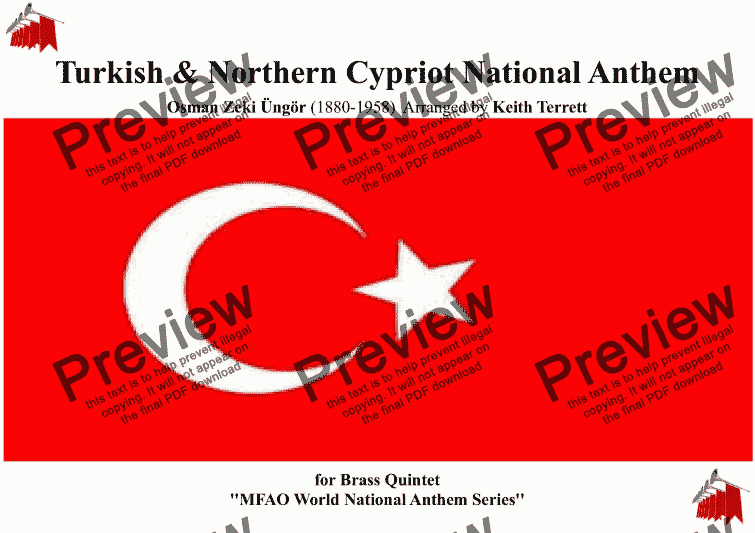 Composer
Osman Zeki Ungör
Year of composition
1921
Publisher
Music for all Occasions
Difficulty
Moderate (Grades 4-6)
Duration
1 minute
Genre
Classical music
License details
For anything not permitted by the above licence then you should contact the publisher first to obtain permission.

The Turkish & Northern Cypriot National Anthem arranged for Brass Quintet. There are versions for String & full Orchestra in store.

The İstiklâl Marsı (Independence March) is the Turkish National Anthem, officially adopted on 12 March 1921 - two years before the 29 October 1923 establishment of the modern day Republic of Turkey, both as a motivational musical saga for the troops fighting in the Turkish War of Independence, and as an anthem for a Republic that was yet to be established.

Penned by Mehmet Akif Ersoy and ultimately composed by Osman Zeki Ungör, the theme is one of affection for the Turkish homeland, freedom, and faith, of sacrifice for liberty, and of hope and devotion, explored through visual, tactile and kinesthetic imagery as they relate to the flag, the human spirit and the soil of the homeland.

The Anthem is regularly heard during state and military events, as well as during national festivals, bayrams, sporting events, and school ceremonies.

Of the ten-stanza anthem, only the first two quatrains are sung, with an upright, immobile and solemn composure. A framed version of the national anthem typically occupies the wall above the blackboard in the classrooms of every public as well as most private schools in Turkey, along with a Turkish flag, a photograph of the country’s founding father Ataturk, and a copy of Atatürk’s famous inspirational speech to the nation’s youth.

The composition has also been adopted as the National Anthem of the Turkish Republic of Northern Cyprus.