By: Alberich Zwyssig
For: Brass quintet
This music is in your basket
View basket
Loading... 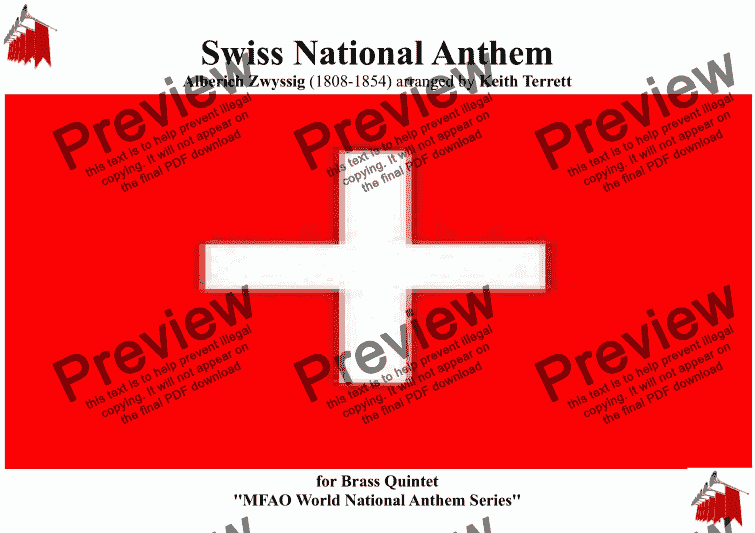 By: Alberich Zwyssig
For: Brass quintet

Composer
Alberich Zwyssig
Year of composition
1841
Publisher
Music for all Occasions
Difficulty
Moderate (Grades 4-6)
Duration
1 minute
Genre
Classical music
License details
For anything not permitted by the above licence then you should contact the publisher first to obtain permission.

If you need an anthem not yet in my store, let me know, my rates are very reasonable. There are versions for String Orchestra & full Orchestra in my two stores.

The Swiss Psalm is the national anthem of Switzerland. It was composed in 1841, by Alberich Zwyssig (1808-1854). Since then it has been frequently sung at patriotic events. The Federal Council declined however on numerous occasions to accept the psalm as the official anthem. This was because the council wanted the people to express their say on what they wanted as a national anthem.

From 1961 to 1981 it provisionally replaced Rufst Du, mein Vaterland ("When You call, my Country", French O Monts indépendants; Italian Ci chiami o patria, Romansh E clomas, tger paeis) the anthem by Johann Rudolf Wyss (1743-1818) which was set to the melody of God Save the Queen.

Finally on April 1, 1981 the Swiss Psalm was declared the official Swiss national anthem.

Until the end of the 19th Century, there was no Swiss national anthem.

The Swiss Psalm was composed in 1841 by Alberich Zwyssig (1808-1854), with lyrics by Leonhard Widmer (1809-1867)[1]. Since then it has been frequently suggested it be adopted as the official anthem, but the Swiss Federal Government has refused several times, wishing to let the people decide what they want to sing on political and military occasions.

Fountain memorial for the composer Alberich Zwyssig and the Swiss Psalm’s poet Leonhard Widmer in Zürich-Seefeld (Zürichhorn)The setting of the hymn to the British tune of God Save the Queen led to embarrassing situations when both countries’ anthems were played. Therefore it was replaced with another tune in 1961. After a trial period of three years the Swiss tune was adopted indefinitely in 1965. The statute could not be challenged until ten years later but did not totally exclude the possibility of an ultimate change.

A concourse was put in place in 1979 after searching for a successor to the anthem. After many submissions, none of the others seemed to express the Swiss sentiment.

The Swiss anthem finally got its definitive statutory status in April 1981, the Federal Council maintaining that it was purely a Swiss song suitably dignified and solemn.

The popularity of the song has not been established. At least, it has been shown with several vox pops taken that many people don’t know it at all, and only a small percentage can recite it all.

There are two tentative replacements for the psalm:

In 1986 Roulez tambours (Roll the drums) by Romand Henri-Frédéric Amiel and proposed by the Swiss National Alliance.

At the end of the 1990s, The Fondation Pro CH 98 equally tried to promote a new anthem composed by the Argovien Christian Daniel Jakob. These alternatives have not been put to the test.