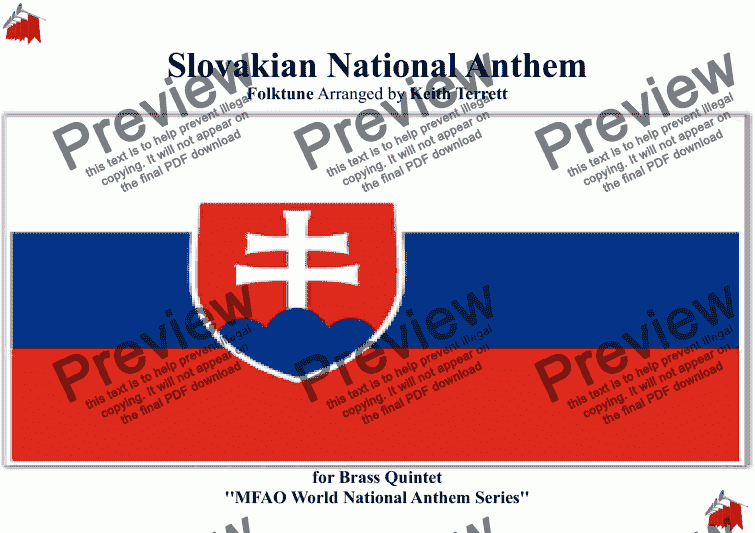 The National Anthem of Slovakia arranged for Brass Quintet. There are versions for String Orchestra & Orchestra in my stores.

Nad Tatrou sa blýska (English: Lightning over the Tatras) is the national anthem of Slovakia. The origins of the anthem are in the Central European activism of the 19th century. Its main themes are a storm over the Tatra mountains that symbolized danger to the Slovaks, and a desire for a resolution of the threat. It used to be particularly popular during the 1848 - 1849 insurgencies.

On 13 December 1918, only the first stanza of Janko Matúška’s lyrics became one half of the two-part bilingual Czecho-Slovak anthem composed of the first stanza from a Czech operetta tune, Kde domov můj (Where Is My Home?), and the first stanza of Matúška’s song, each sung in its respective language and both played in that sequence with their respective tunes.[12] The songs reflected the two nations’ concerns in the 19th century[13] when they were confronted with the already fervent national-ethnic activism of the Hungarians and the Germans, their fellow ethnic groups in the Habsburg Monarchy.

When Czecho-Slovakia fell apart into the Czech Republic and the Slovak Republic in 1993, the second stanza was added to the first and the result legislated as Slovakia’s national anthem.[14][15] The competing national song Hej, Slováci was a version of the international pan-Slavic movement’s traditional anthem, Hey, Slavs.

The reference in Nad Tatrou sa blýska to the Tatras has a parallel in the interpretations of Slovakia’s coat of arms that was defined during the period when Matúška wrote the lyrics. The Slovak coat of arms is a slight variant of a prominent part of the Coat of arms of Hungary, where it is considered to symbolize the three principal mountain ranges of the pre-1918 Kingdom of Hungary: Mátra, Fatra, and the Tatras. Slovakia was part of the Kingdom of Hungary until 1918. The doublecross in the coat of arms represented these lands from early 9th century, when Cyril and Methodius came to Great Moravia. They brought this symbol with them from the Byzantine Empire. Later Hungarian King Béla IV took the sign and put it into official coat of arms of the Hungarian Kingdom as a sign of "Northern Hungary", today Slovakia. Although today only the Tatras and Fatra belong to the republic, and the other one is in Hungary. A more popular explanation is that the three peaks are symbolic of the Tatras. Some say, too, that they represent the mountain group of Vysoká in the High Tatras. 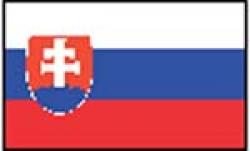