By: Tsvetan Tsvetkov Radoslavov (1863-1931)
For: String orchestra
This music is in your basket
View basket
Loading... 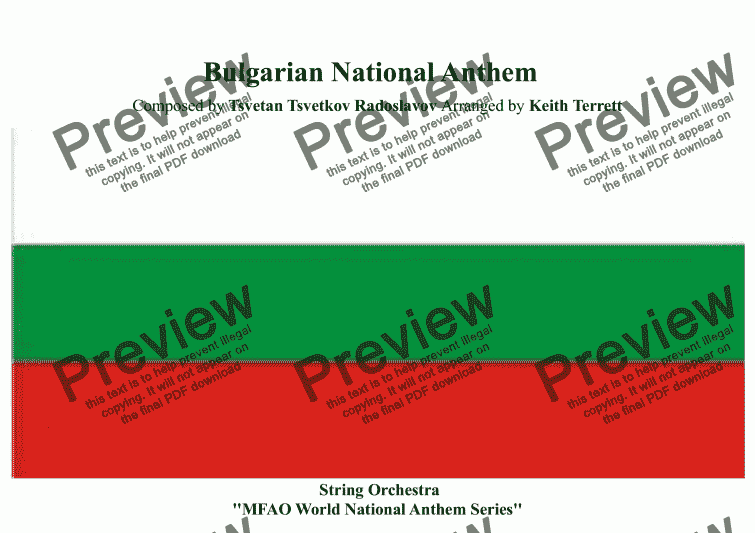 Composer
Tsvetan Tsvetkov Radoslavov (1863-1931)
Year of composition
1885
Arranger
Keith Terrett
Year of arrangement
2018
Publisher
Music for all Occasions
Difficulty
Moderate (Grades 4-6)
Duration
1 minute
Genre
Classical music
License details
For anything not permitted by the above licence then you should contact the publisher first to obtain permission.

There are alternative versions for Symphony & Brass Quintet in my stores.

It is based on the music and text of the song "Gorda Stara Planina" by Tsvetan Radoslavov, written and composed as he left to fight in the Serbo-Bulgarian War in 1885. The anthem was adopted in 1964. The text has been changed many times, most recently in 1990.

Originally written and composed by a Bulgarian student in 1885, as he went off to fight in the Serbo-Bulgarian war, the song was titled “Горда Стара планина” (“Gorda Stara planina”) [Proudly Rise the Balkan Peaks]. The original lyrics have undergone revisions since its original composition, the latest after the fall of the communist government in 1990 where verses not in the original lyrics speaking of friendship with Russia, the Communist Party, and fallen fighters were removed. As the national anthem its name comes from the first line of the chorus rather than the first line of the verse.﻿

For more of my original music, great arrangements and all the national anthems of the world, check out my on-line stores: https://www.scoreexchange.com/profiles/keithterrett1 http://www.sheetmusicplus.com/search?Ntt=keith+terrett Need an anthem fast? They are ALL in my store! All my anthem arrangements are also available for Orchestra, Recorders, Saxophones, Wind, Brass and Flexible band. If you need an anthem urgently for an instrumentation not in my store, let me know via e-mail, and I will arrange it for you FOC if possible! keithterrett@gmail.com If you perform this arrangement in public, make a recording or broadcast it through any media, please notify the PRS (UK), or ASCAP (USA), or SOCAN (Canada), or APRA (Australia) or KODA (Denmark) or the equivalent organisation in your own country, giving the name of the arranger as Keith Terrett. Love national anthems, then join me on twitter, facebook, instagram & soundcloud for frequent updates & news on my Olympic bid!