Solomon - Act III, Sinfonia "Arrival of the Queen of Sheba" 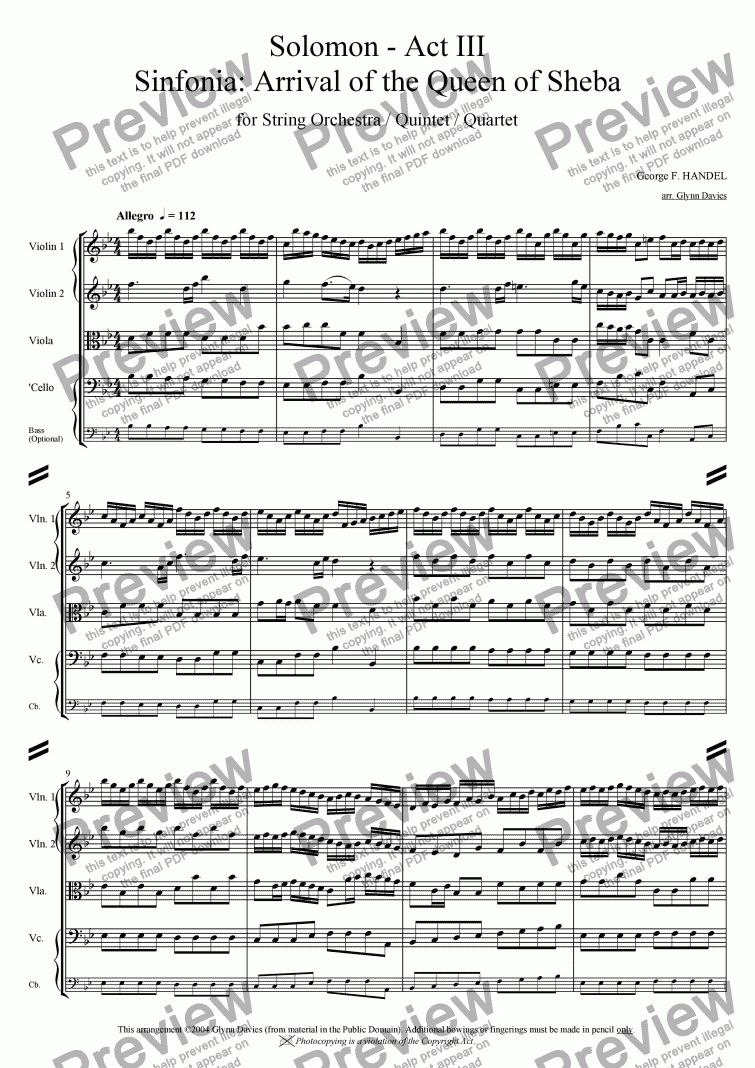 Solomon - Act III, Sinfonia "Arrival of the Queen of Sheba"

Composer
George F. Handel
Year of composition
1748
Arranger
Glynn Davies
Difficulty
Difficult (Grades 7+)
Duration
3 minutes
Genre
Classical music
License details
For anything not permitted by the above licence then you should contact the publisher first to obtain permission.

Solomon was one of two oratorios that Handel composed for the 1749 Lenten concert season in London (the other being Susannah); as was his habit, he composed the work during the relatively open months of the previous summer (May/June, 1748) when his energies were less divided by the presentation of concerts and operas. Textual similarities between Solomon and Susannah suggest their librettos ? both of exceptional quality ? were written by the same person; unfortunately there is no record of the author's identity. Both libretti were once thought to be the work of Thomas Morell ? the author of Jeptha, Judas Maccabaeus, Theodora, and Joshua ? but any close examination of the texts reveals irreconcilable stylistic disparities.

Most of the text for Solomon was based on scriptural passages drawn from II Chronicles and I Kings; as the title of the work makes clear, the selected passages are those dealing with the renowned King Solomon. It is possible that Handel's choice of this subject matter was his tribute to King George II of England, a generous patron, and under whose rule England enjoyed a period of comparable prosperity; but ? unlike Judas Maccabaeus, in which case Handel wrote letters specifically outlining his intended tribute to the victorious Duke of Cumberland ? there is no textual evidence to establish this as fact.

In portraying the biblical Solomon, the anonymous librettist chose to divide his work into three acts, each of which sheds a slightly different light on his subject. The first act evokes the sensual and poetic voice from the Song of Solomon; the king and his new wife express their mutual rapture and contentment. The Solomon portrayed here is fiercely devoted to his lone queen ? far from faithful to scripture, in which he is said to have had many hundreds of wives, and half again as many concubines! The second act takes up Solomon's most famous action, namely his resolution of the dispute between two harlots, each of whom claims to be the rightful mother of a baby; by suggesting that he cut the child in half and give one part to each woman, he ferrets out their true intentions and justly resolves the case. Act three takes as its subject a visit by the Queen of Sheba. Solomon presents the wonders of his kingdom to her in the form of a musical masque.

Handel's score is notable for the inclusion of a full array of brass instruments, and an unusually large complement of strings, both of which lend the score a particular opulence and richness; this is often highlighted by the composer's division of the chorus into five, or sometimes eight, parts. The opening sinfonia is of unusual scope for Handel's oratorios. It has been suggested that one of the most popular excerpts from Solomon, namely the entrance of the Queen of Sheba from the third act, was not actually composed for the work at hand, but rather was borrowed from another unfinished project.

Reviews of Solomon - Act III, Sinfonia "Arrival of the Queen of Sheba"