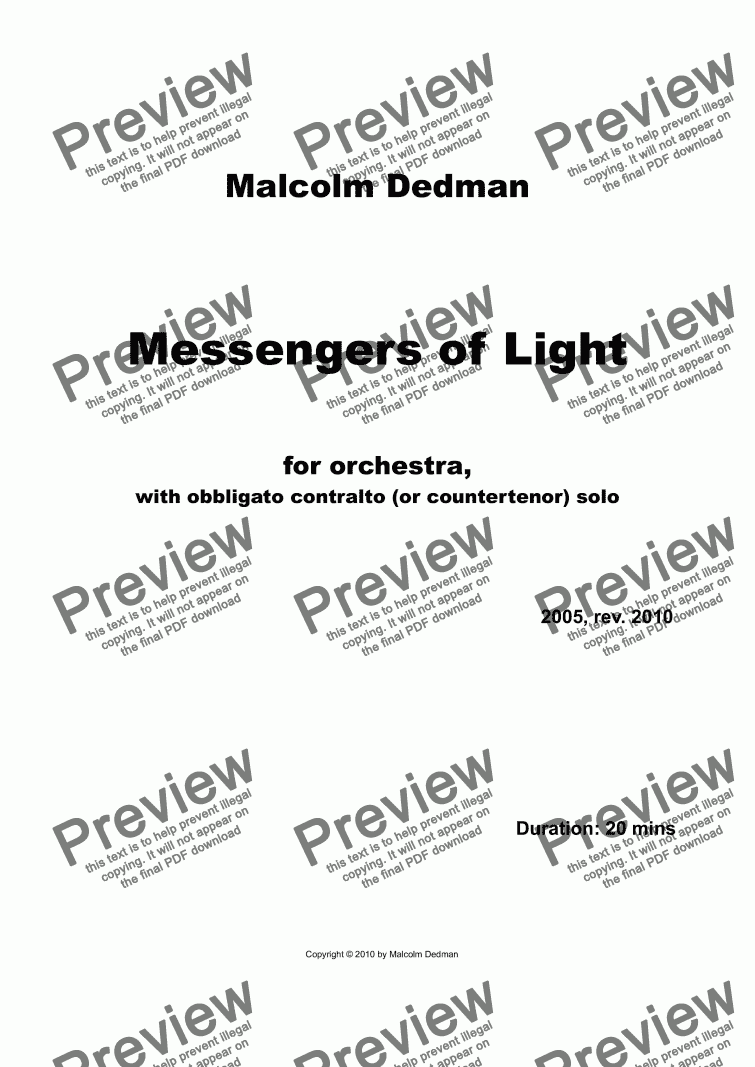 Price:
(+ VAT when applicable. Price is for score onlyPrice is for score and complete set of 35 parts)
Note: The publisher requires a minimum purchase of 1 licenses
Change currency...
You are purchasing high quality sheet music PDF files suitable for printing. You are purchasing a this music. Be sure to purchase the number of copies that you require, as the number of prints allowed is restricted.

’Messengers of Light’ lasts around twenty minutes and is scored for an orchestra of triple woodwind, four each of horns and trumpets, 3 trombones, tuba, timpani, two percussion players, piano, celesta and strings. A contralto/countertenor soloist is also included in the fourth of five movements. The movements’ titles are ’The Messenger’, ’Revocation’, ’Renewal’, ’O Fleeting Shadow!’ and ’The Glory’. These titles are only meant to guide the listener to the intended meaning behind the music. Although I offer a short guide to the link between the musical ideas and the intended philosophical meaning, I believe it is the listener who should interpret the full meaning for himself.

The ’Messengers’ in the title relates to the Founders of the major religious Faiths Who have brought the Word of God to mankind. The music expresses a range of mankind’s reaction to the messages They brought, ranging from fear and rejection at the start of the piece, leading to a complete acceptance by the end. The Message itself is represented in the fourth movement by setting the ninth of the Persian Hidden Words by Bahá’u’lláh, the Founder of the Bahá’í Faith. It is my intention that listeners from a wide range of backgrounds and Faiths will be able to derive meaningful interpretations of this piece.

The second movement demonstrates mankind’s rejection of God whereby man attempts to go his own way, but meets with disaster along the way. Three attempts are made to ’have a good time’, expressed as spiky jazzy rhythms, and the third attempt ends in complete devastation.

The third movement opens with an expression of regret at what has happened and moves towards a reaching out (rising phrases) to God’s Word. The word setting of the fourth movement confirms this acceptance.

The final movement is a hymn of joy, using semi-minimalist patterns of irregular rhythms, as well as a prominent choral stated in three different ways. The third statement of the choral is for the brass section and, along with those repeating rhythms, brings this work to a joyful close.

Reviews of Messengers of Light