By: E. Gyimah Labi
For: Percussion ensemble
This music is in your basket
View basket
Loading... 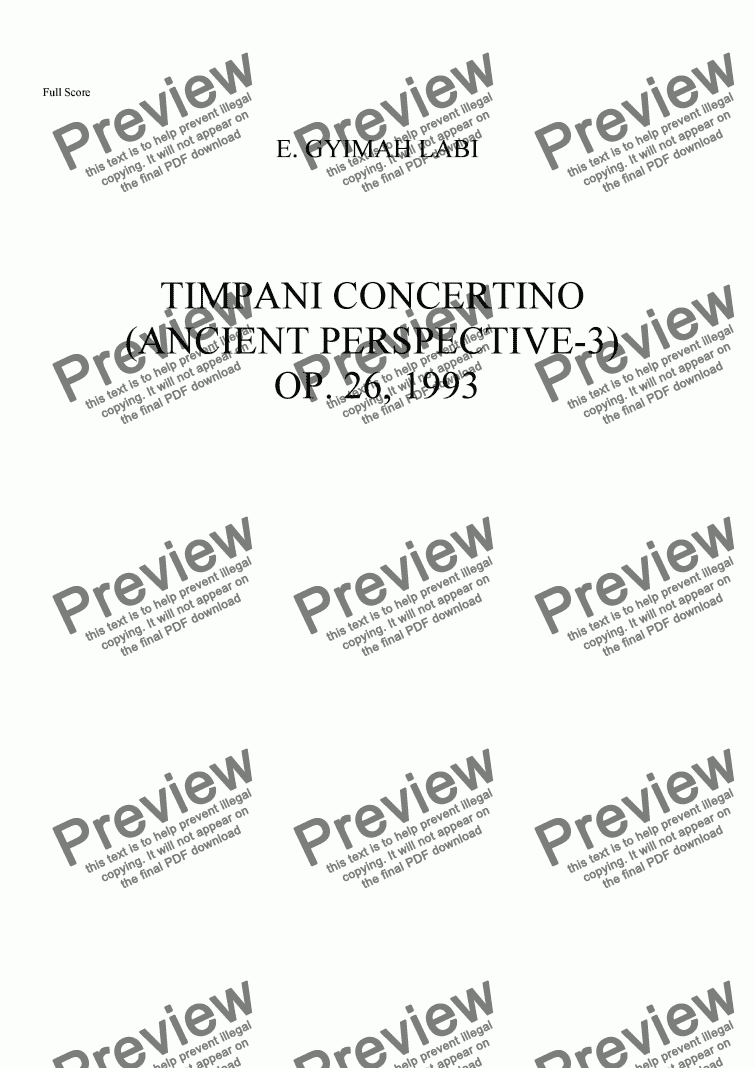 Composer
E. Gyimah Labi
Year of composition
1993
Difficulty
Difficult (Grades 7+)
Duration
12 minutes
Genre
Modern classical music
License details
For anything not permitted by the above licence then you should contact the publisher first to obtain permission.

Timpani Concertino, "Ancient Perspective-3 was written in 1974, while a student at the University of Ghana, School of Performing Arts, Department of Music. It was the result of a commission from the College of Creative Arts, University of West Virginia, in 1974, for a professor in its saxophone department. It has since been revised (1993). It was originally written for the alto sax with percussion accompaniment and has since been expanded to include the baritone saxophone as well. The timpani part emulates Anglo-Ewe drumming of Ghana/Togo. The master drum used in Ewe drumming is called the Atimevu - a cylindrical drum, of about 5 feet tall, a foot in diameter, with a bulging mid-section, upon which varied tone are achieved both on the patchment head as well as on the body of the drum itself. The open palm and a short stick help in producing the varied tones. As this instrument would not be common outside its traditions environment, I have decided to write for the timpani instead - a standard orchestral instrument.

This concertino was first premiered at the University of West Virginia, College of Creative Arts in 1975 and the revised version was premiered in March of 2000 in Vancouver, in a concert by University of Vancouver Music Department and Novo Musique, in honor of Prof. Akin Euba of University of Pittsburgh and me. My String Quartet in Two Movements "At the Immaculate Beehive" also received its Canadian debut during this concert.

A pair of intermediate supporting drums (sogo(s) tuned to match those of the sleigh bells and shaker may be used instead. Another pair of ISDs - (kidi(s) may replace the kidi/sogo lines.

The melodic and harmonic activities are essentially quartal, a particular preference of this traditional ethnic group.