By: Friedrich Von Flotow
For: Solo Trumpet in Bb + piano
This music is in your basket
View basket
Loading... 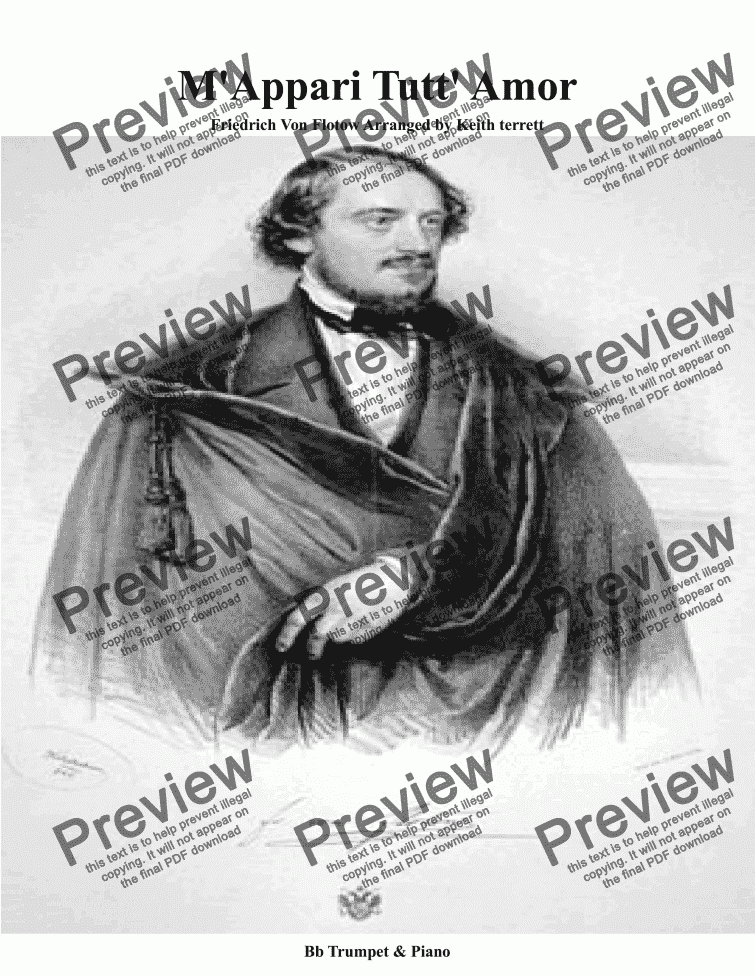 By: Friedrich Von Flotow
For: Solo Trumpet in Bb + piano

Composer
Friedrich Von Flotow
Year of composition
1844
Arranger
Keith Terrett
Year of arrangement
2014
Publisher
Music for all Occasions
Difficulty
Moderate (Grades 4-6)
Duration
2 minutes
Genre
Classical music
License details
For anything not permitted by the above licence then you should contact the publisher first to obtain permission.

The first performance of Martha took place at the Kärntnertortheater in Vienna on 25 November 1847. Other early productions which followed included those at the Theatre Royal, Drury Lane in London on 4 July 1849.

In the United States, it was produced at Niblo’s Garden in New York on 1 November 1852 with Anna Bishop. and New Orleans on 27 January 1860, in French. Further notable performances in France were given at the Théâtre Lyrique in Paris on 16 December 1865 with the first inclusion of ’M’appari’ (drawn from Flotow’s L’âme en peine).

In 1877, at the Royal Italian Opera in Covent Garden, Victor Capoul performed as Lyonel, with Francesco Graziani (baritone) as Plumkett and Sofia Scalchi as Nancy.

The popularity of Martha received a fresh boost in 1906 when it was staged at the New York Metropolitan Opera in a production that featured the great tenor Enrico Caruso, singing in Italian. Caruso would perform the role of Lyonel many times during subsequent seasons and record extracts from the Italian version of the opera. Recent productions in Great Britain have included those by Opera South in 1986 and 2009 and Bel Canto Opera in 2002. Those in the U.S have included Michigan Opera Theatre in 1985.

Certainly ‘M’appari’ was conceived as part of Martha in the original German, where it was known as ‘Ach! so fromm, ach! so traut’. Martha travelled from Vienna on to Weimar, Dresden, and Leipzig, then Budapest and Prague. And by 1849 it had made its way to London, where it was sometimes performed in five acts, with the libretto translated into English by Charles Jefferys. It was produced in New York City in 1852, and in Melbourne in 1856. And it was first performed in France by the Théâtre-Italien at the Salle Ventadour in Paris on 11 February 1858. This Italian version of Flotow’s opera introduced the song as ‘M’appari tutt’amor’.