By: Samuel Scheidt (1587-1653) arr. Keith Terrett
For: Large mixed ensemble
This music is in your basket
View basket
Loading... 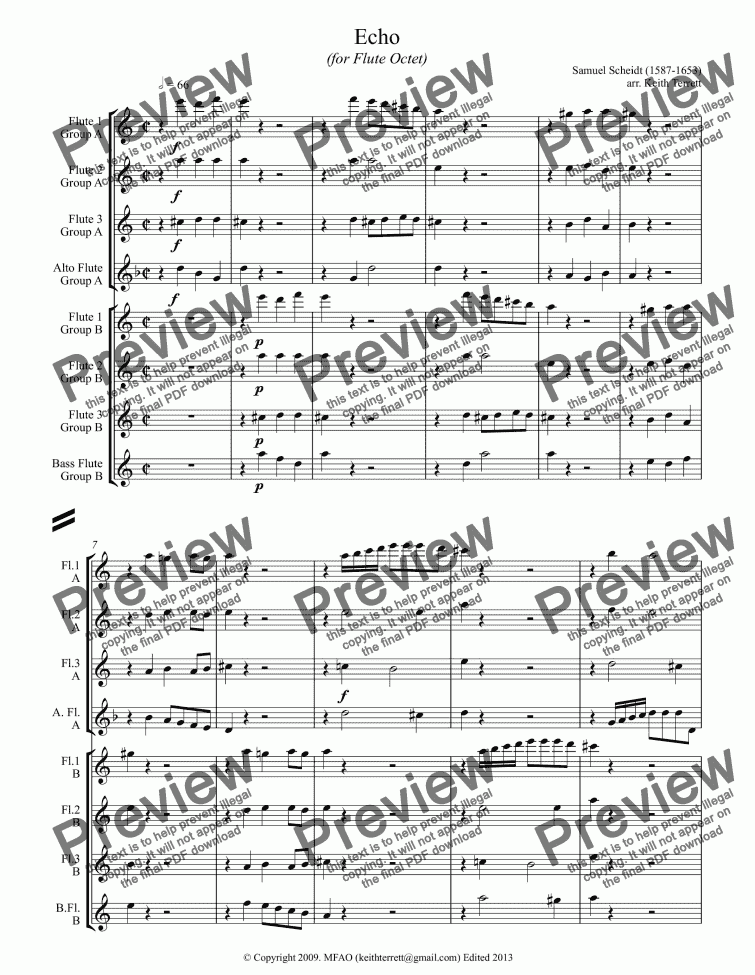 Composer
Samuel Scheidt (1587-1653) arr. Keith Terrett
Publisher
Music for all Occasions
Difficulty
Moderate (Grades 4-6)
Duration
1 minute
Genre
Classical music
License details
For anything not permitted by the above licence then you should contact the publisher first to obtain permission.

"Echo" for Flute Octet is scored for two choirs of various Flutes. The music of Samuel Scheidt is a beautiful fit for modern flute instruments and Keith Terrett has done a magnificent job with this arrangement which can be performed by moderately advanced performers.

One of the earliest German composers to forge a synthesis of traditional Germanic chorale and counterpoint with the more modern textures emerging from Italy, Samuel Scheidt was a multifaceted composer of music both sacred and secular whose fame, however, rests almost entirely on the excellence of his instrumental music.

Scheidt was born in Halle during the late 1580s, within a year of both Heinrich Schütz and Johann Hermann Schein. Both would later become friends of Scheidt, and who were engaged, like Scheidt, in the fusion of the musical idioms from northern and southern Europe. Scheidt’s father was a municipal official who maintained a number of friendships with prominent local musicians, and encouraged his sons to pursue musical studies. Scheidt attended public school, and was instructed in music by the Kantor of the local Gymnasium, Matthäus Birkner, until he attained the position of organist at the Moritzkirche in Halle in 1604. After resigning the post four years later, Scheidt journeyed to Amsterdam for a period of study with well-known organist Jan Sweelinck, whose music Scheidt would later edit and publish back in Germany.

Reviews of Echo for Flute Octet