By: Friedrich von Flotow
For: Solo Solo Violoncello + piano
This music is in your basket
View basket
Loading... 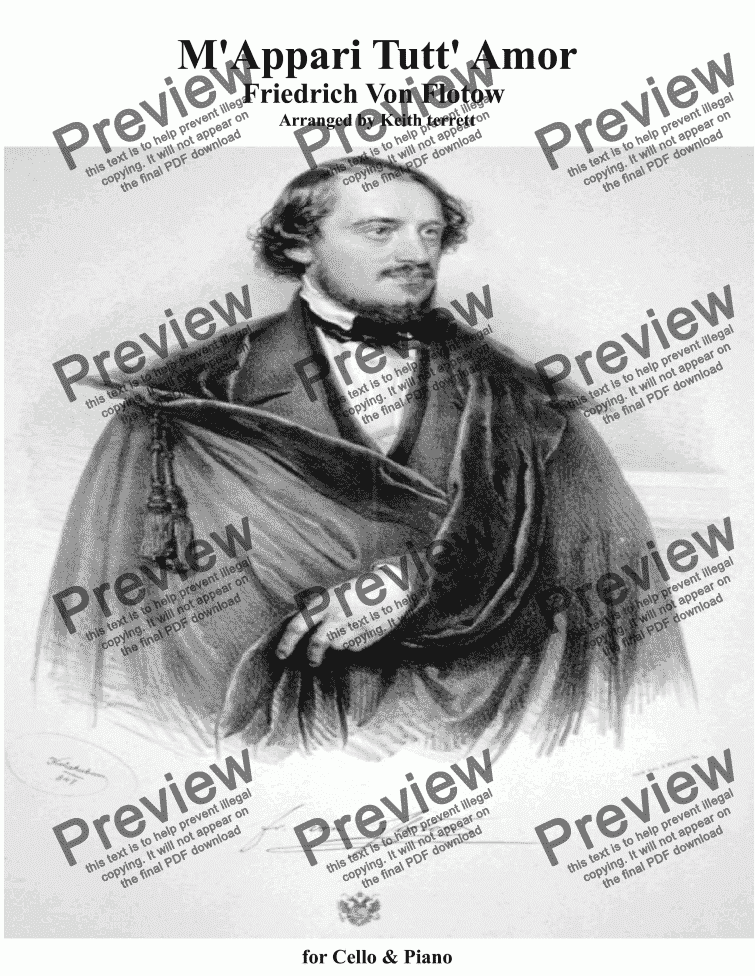 Composer
Friedrich von Flotow
Year of composition
1842
Arranger
Keith Terrett
Year of arrangement
2014
Publisher
Music for all Occasions
Difficulty
Moderate (Grades 4-6)
Duration
2 minutes
Genre
Classical music
License details
For anything not permitted by the above licence then you should contact the publisher first to obtain permission.

Friedrich Adolf Ferdinand, Freiherr von Flotow (27 April 1812 - 24 January 1883) was a German composer. He is chiefly remembered for his opera Martha, which was popular in the 19th century.

Flotow was born in Teutendorf, in Mecklenburg, into an aristocratic family. He studied at the Conservatoire de Paris and came under the influence of Auber, Rossini, Meyerbeer, Donizetti, Halévy, and later Gounod and Offenbach. These influences are reflected in his operas, where a distinctive French opéra comique flavour exists.

He completed his first opera in 1835, Pierre et Cathérine, but his breakthrough came with Le naufrage de la Méduse (1839), based on the wreck of the warship Méduse. The three-act romantic opera Alessandro Stradella of 1844 is recognized as one of Flotow’s finer works. Martha was first staged in Vienna at the Theater am Kärntnertor on 25 November 1847.

Between 1856 and 1863 Flotow served as Intendant of the court theatre at Schwerin. He spent his last years in Paris and Vienna and had the satisfaction of seeing his operas mounted as far away as Saint Petersburg and Turin. He died in Darmstadt at the age of 70.

Certainly ‘M’appari’ was conceived as part of Martha in the original German, where it was known as ‘Ach! so fromm, ach! so traut’. Martha travelled from Vienna on to Weimar, Dresden, and Leipzig, then Budapest and Prague. By 1849 it had made its way to London, where it was sometimes performed in five acts, with the libretto translated into English by Charles Jefferys. It was produced in New York City in 1852, and in Melbourne in 1856. And it was first performed in France by the Théâtre-Italien at the Salle Ventadour in Paris on 11 February 1858. This Italian version of Flotow’s opera introduced the song as ‘M’appari tutt’amor’.