By: Vivaldi
For: Brass quartet
This music is in your basket
View basket
Loading... 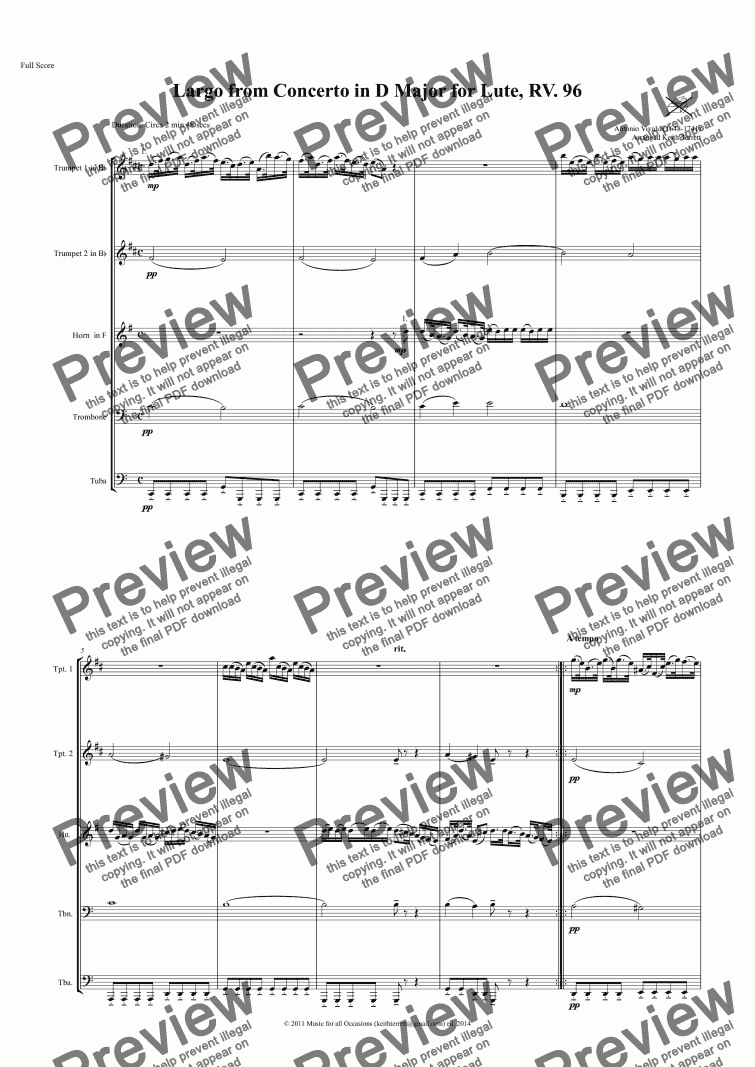 By: Vivaldi
For: Brass quartet

Composer
Vivaldi
Arranger
Keith Terrett
Publisher
Music for all Occasions
Difficulty
Moderate (Grades 4-6)
Duration
3 minutes
Genre
Classical music
License details
For anything not permitted by the above licence then you should contact the publisher first to obtain permission.

An arrangement for Brass Quintet of Vivaldi’s Largo from Concerto in D Major for Lute, RV. 96; in an easier tessitura than the Pro version in D.

Antonio Lucio Vivaldi (March 4, 1678-July 28, 1741), nicknamed il Prete Rosso ("The Red Priest"), was a Baroque composer and Venetian priest, as well as a famous virtuoso violinist, born and raised in the Republic of Venice. The Four Seasons, a series of four violin concerti, is his best-known work and a highly popular Baroque piece. Many of Vivaldi’s compositions reflect a flamboyant, almost playful, exuberance. Most of Vivaldi’s repertoire was rediscovered only in the first half of the 20th century in Turin and Genoa and was published in the second half. Vivaldi’s music is innovative, breaking a consolidated tradition in schemes; he gave brightness to the formal and the rhythmic structure of the concerto, repeatedly looking for harmonic contrasts and innovative melodies and themes. Moreover, Vivaldi was able to compose nonacademic music, particularly meant to be appreciated by the wide public and not only by an intellectual minority. The joyful appearance of his music reveals in this regard a transmissible joy of composing; these are among the causes of the vast popularity of his music. This popularity soon made him famous in other countries such as France which was, at the time, very independent concerning its musical taste.