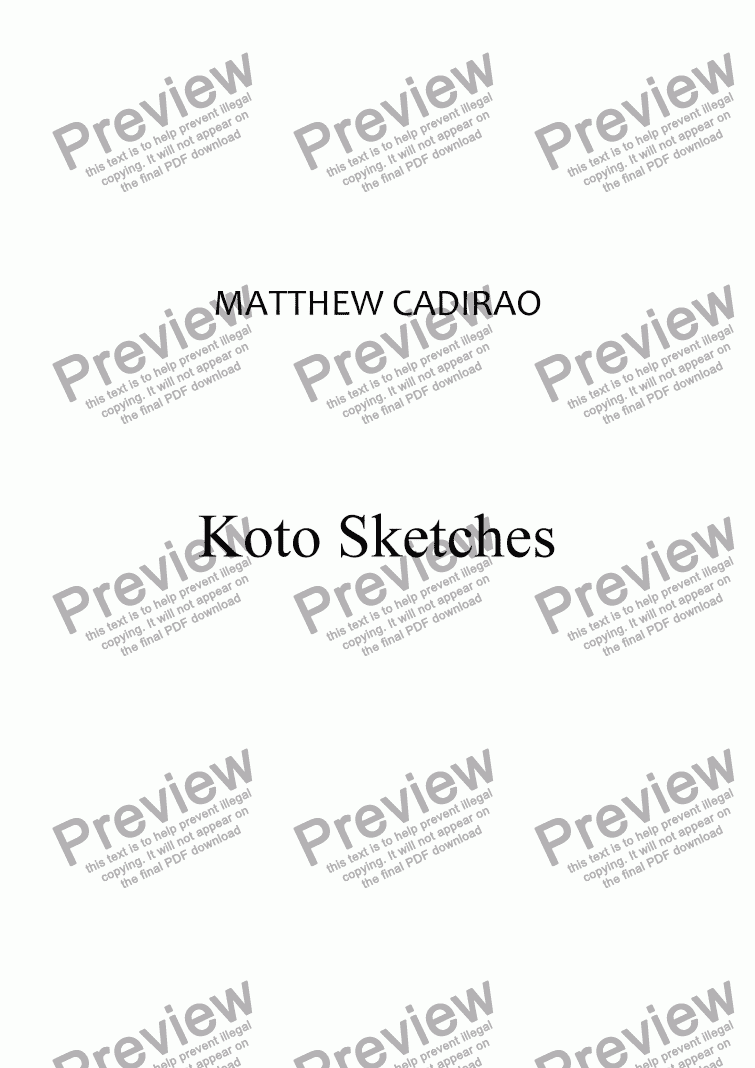 This short piece was composed for the AURA-J reading session in March 2010 at the University of Hawai�i at M�noa. I was given the opportunity to compose for two kotos, one 21-string and one 17-string bass, so naturally I took the chance and decided to experiment composing for the instruments. A couple months later I had numerous sketches and material some which I used for this piece. The three-and-a-half minute work has two primary contrasting ideas, one harsh and agitated and the other calm and peaceful. These were originally entirely different sketches juxtaposed against one another for musical effect. Both, however, have movement and incorporate complex interlocking rhythms between the two kotos. The kotos are also tuned to a slendro-like scale based on a heavily-modified five-tone equal temperament.

Performance Notes: ��Being a composition for koto, special notation is used for koto-specific techniques. Notation is selected from Composing for Japanese Instruments (2008) by Minoru Miki. ��For bends (oshide and oshibiki), the altered note should sound as written. Preferably the pitches played should match those of the instrument if there is already a similar note. Others (such as E and G natural) should be interpolated based on the surrounding notes. Of course this is all at the performers� discretion; there is no penalty for playing �out of tune� notes in tune with Western 12-tone equal temperament. ��The special tuning I invented to emulate slendro tuning of Javanese gamelan. I tuned the �black keys� (Eb, Gb, Ab, Bb, and Db) to 5-tone equal temperament with the reference being Eb. Then I adjusted the cents to make Db and Gb much lower, Ab a little lower, and Bb a little higher, and added C and F to fill in the diatonic notes (resulting in a nicely out-of-tune Eb dorian scale). ��All octaves use the same modifications; they may be pure or stretched (I�m not exactly sure how inharmonic a koto�s strings are) as long as the tuner compensates. The 21-string koto should set its tuner to A=440 and the 17-string koto should set the tuner to A=437.