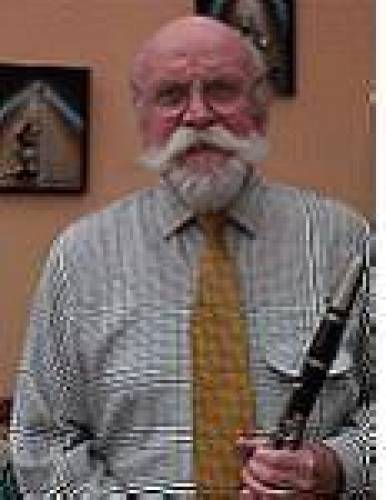 Johnny Jones sadly passed away in December 2019 - he wanted his music to live on . The following account, is what he wrote about his life, work and music .

Hi there, I was born in Maerdy, Rhondda Valley in S.Wales, December 1942, my musical skills became apparent in my early teens when I began playing the clarinet. Whilst at school I performed with the Glamorgan Youth Orchestra as principal 2nd clarinet,1958-1960.

Having passed an entry audition I joined the Royal Air Force as a musician in 1961. On completion of my training at the RAF School of Music at RAF Uxbridge I joined my first established band as a solo clarinettist at RAF Locking, and then in 1965 to the College Band at RAF Cranwell.

In June 1966 I began a tour in the Far East Air Force Band based at RAF Changi, Singapore.My 4 and a half years at Singapore were used constructively. I taught myself to play the saxophone and flute. During this period I began seriously arrange music for the military and swing band. I Formed my first dance band "The Frontliners", and became well known on the hotel circuit. This led to a contract to arrange music for Radio Television Singapore; which in turn led to my teaching clarinet to Lee Kwan Yew's, the Prime Minister of Singapore, two sons.

Nov.. 1970 I returned to the UK to the Western Band at RAF Locking. 1971, I formed and organised 2 bands - an 8 piece gig band, "The Severn Sounds", which became Western Bands formal dance band, and a 17 piece swing band, "Touch of Class", which performed mainly at charity balls and functions; eventually becoming renowned throughout the South and West of England. The next 4 years were taken up with studying music under the tutorship of Dr Ken Abbott, and much arranging, some even for the Royal Marine and Army Services, especially with Cpt Terry Kenny.

In Oct.. 1976 I joined the Central Band of the RAF at Uxbridge as a clarinettist and bari-sax player in the RAF Dance Band. I formed yet another 17 piece big band "Swing Wing". This band was eventually to become the "New Squadronaires". In my 'spare' time I began teaching evening classes at High Wycombe, which in turn led to the formation of Bucks Youth Jazz Orchestra, of which I was the principal woodwind instructor, alongside NYJO's Bill Ashton. 1978 the Principal Director of Music RAF, Wg Cdr John Martindale, appointed me to the post of Staff Arranger to the RAF Music Services. I have the privilege of being the only person to hold this position.

1981, I won the Studio Music Award for an original composition. 1982 the David Marcus Award for best arrangement; this led to numerous commissioned pieces for the Coldstream Guards Band, by their Director of Music, Major Derek Kimberly. 1983 back to the School of Music as Chief Woodwind Instructor.1985, a 3 years tour in RAF Germany Band, at RAF Rheindahlen. On completeion of the Bandmasters Course, under the tutorship of Dr Derek Heally, I was appointed Bandmaster of the College Band; then, as a final tour of duty returned to the Western Band.

I retired from the RAF in December 1997, after nearly 37 years service that has taken me to 67 countries worldwide. I reside with my wife Cathrine in Aberdare, S.Wales, and spend most of my time composing and arranging. Many of my arrangements, 294 Concert Windband and well over 1000 Swing Band charts, are still performed throughout the world and form an important part of many bands' repertoire.

Please excuse me for late replying to e-mails as I am currently undergoing treatment for Colon Cancer.