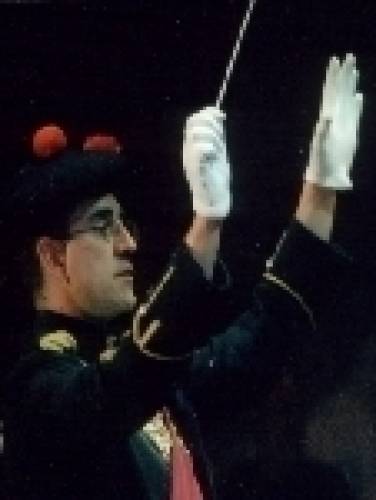 Graeme Abernethy grew up in the north of Scotland learning the piano and later French horn. He was extremely fortunate to gain a scholarship to take regular horn lessons from the late Ifor James. After enlisting as a horn player in the Regimental Band of the Gordon Highlanders in 1983, he attended the Pupils’ Course at the Royal Military School of Music, Kneller Hall the following year, studying horn under Denzil Floyd and winning awards as top instrumentalist, for the highest marks in the written examinations and for strongest overall achievement on the course.

On leaving the Regular Army in 1989 to study for a degree in Chinese at Edinburgh University, he joined the then Band of the 51st Highland Volunteers in the British Territorial Army, being appointed Bandmaster in 1991. Following a postgraduate course in Business Management, he worked exporting commercial catering equipment to Lithuania and marketing bakery equipment in the UK. Music finally won through and after teacher training in Sunderland, he taught music at a secondary school in Dundee for three and a half years.

His parallel Territorial Army career continued until 2010 with the same band, by which time he had been Director of Music for 9 years, and the band had assumed its current name of The Highland Band of the Royal Regiment of Scotland. He was awarded the Queen’s Volunteer Reserves’ Medal (QVRM) for services to military music in the 1999 Queen’s Birthday Honours List.