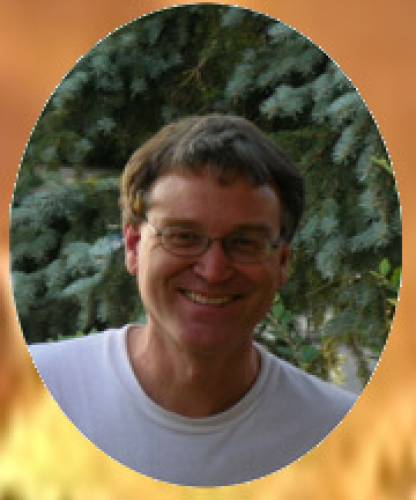 Richard Grew up in El Cerrito California, attending El Cerrito High School from 1975 to 1978. He was then a composition major at California State University @ Hayward from 1978-1981, where he studied with Robert Basart and Glen Glasow.

From 1981 to 1984 He presented over 20 concerts creating the “Circle Concert” concert series. A number of his early compositions premiered on that series including Richard’s First Chamber Symphony. He also presented a few other groups such as a harpsichord recital by Jean Nandi (the daughter of Alan Hovhaness), a Celtic music ensemble and The Kings Trumpets and Shawms. A free publication: “Circle Magazine” with music writings and art, was given out at those concerts.

He worked full-time as fourth Horn of Sacramento Symphony from 1990-1996 for whom he wrote a few arrangements.

In 1996 & 7 he again established the non-profit corporation “Circle Concerts” where he helped to present almost 70 concerts in communities around Northern California. Under this series he performed solo concerts in Chico, Davis, Napa, Sacramento, and more.

He has been principle horn of Regina Symphony in Regina, Saskatchewan since 2003.

Richard Burdick wrote a number of compositions in the 1970's in an experimental graphic form greatly influenced by the Dutch composer Ton Brynel. Starting in the early 1980's Richard has been working on compositions mostly based on the 64 scales inspired by the I Ching which he has developed. Like the scales of Northern India, the trigrams (each of three lines suggesting half and wholes steps) are separated by a perfect fifth. His first version of these scales did not have the separation of the fifth. The third (and current) version of his scales keeps the fifth separation, but is overlaid upon the harmonic series, so each scale has its own key based on the harmonics from 64 to 128. These current scales could be categorized as “microtonal” but in reality they are equal-non-tempered scales.

He now works in three direction in his musical compositions: 1) The micro-tonal third level I Ching scales system (reference CD28 Waves) 2) The second level scales (reference CD23 “more than 64 solos for horn, opus 139” and CD24 “64 duets for two horns, opus 132") 3) A number of his newer works are back in the free music style like what he was writting in the 1970’s

3) Works A full Compositions list of works by Richard O. Burdick can be found here: http://www.i-ching-music.com/R_Burdick_composition_list.html

If there is a work on the list that you are interested please find his e-mail on the bottom of any of his website pages and let him know.